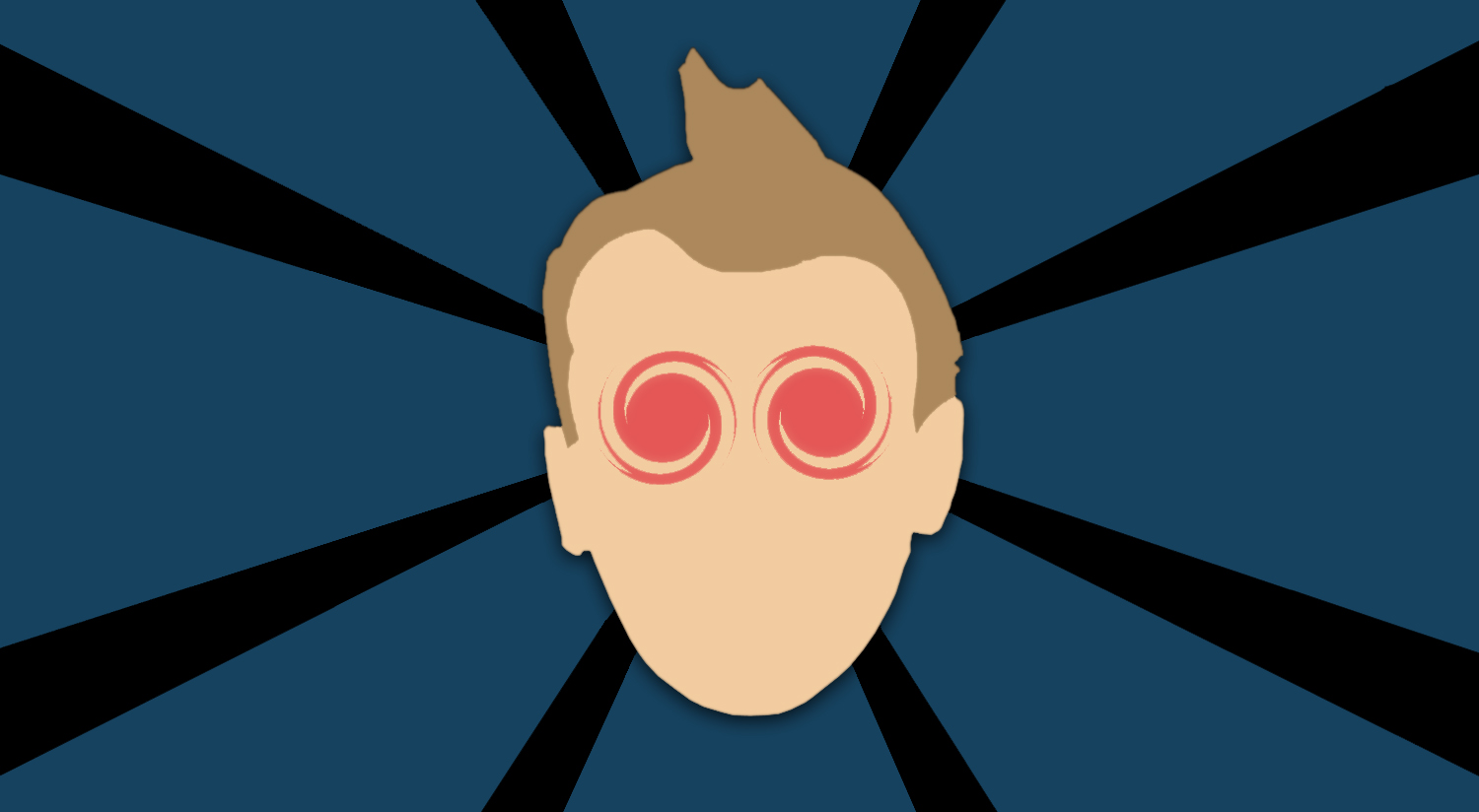 At the very beginning of the movie, we see Scottie vaulting across rooftops, struggling to keep up with the policeman ahead of him as he realizes that he is afraid of heights. He is, of course, suffering from castration anxiety. The ability to chase down criminals is important to his work, which is tied directly to his role as a male, providing for himself. If he is unable to perform adequately, it will signify that he is impotent. When he fails to save the life of the policeman who is trying to save him, he is effectively castrated.1 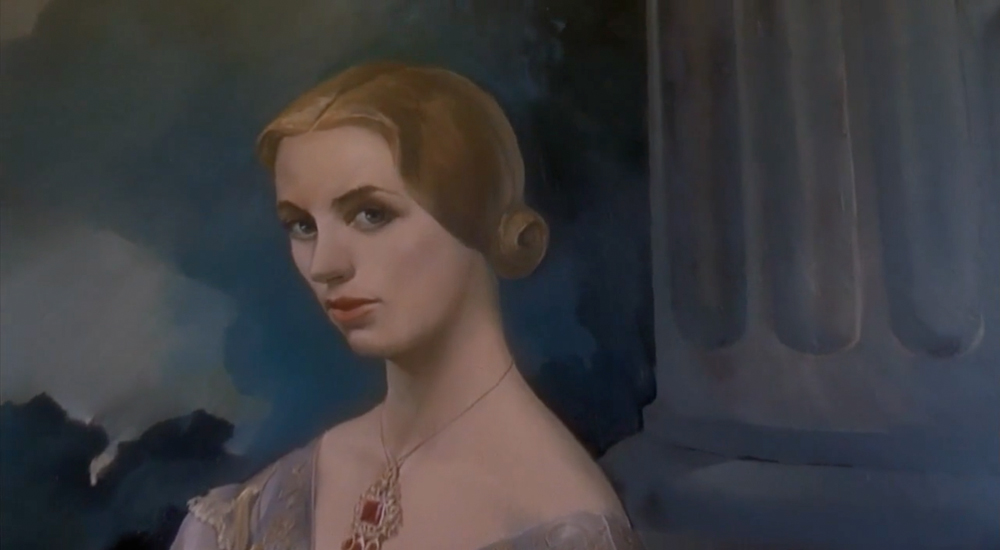 Vertigo was adapted from the French novel, The Living and the Dead (D’entre les morts) by Pierre Boileau and Thomas Narcejac. Paramount Pictures paid $25,275 for the book’s rights and Hitchcock commissioned the screen adaptation from playwright Maxwell Anderson, most famous for his Pulitzer Prize-winning play, Both Your Houses. When Hitchcock was unsatisfied with Anderson’s draft, longtime friend and collaborator, Angus MacPhail, was hired. Possibly due to the fact he was a raging alcoholic, MacPhail quit after completing only fifteen pages (Fun fact: Hitchcock biographer Donald Spoto credits MacPhail with coining the term “MacGuffin“). Alec Coppel was hired as the film’s third screenwriter, but Hitch rejected his work, too. Ultimately, Samuel A. Taylor wrote the final draft, with his most notable contribution outside of the source material being the Midge character. The final film credits both Coppel and Taylor after Coppel protested the Screen Writers Guild and the guild ruled in his favor.

Principal photography lasted an estimated sixty-eight days, from September 30 to December 19, 1957 and Vertigo was released less than five months later, on May 28, 1958 to lukewarm reviews. Initially, the film did not turn much of a profit, costing nearly $2.5 million to produce, which did not include the salaries (and undisclosed percentages on gross) for both Hitchcock and Stewart. At the end of its run, it brought in just $2.8 million in the United States. 2 However, the film has stood the test of time and is now considered by many as Hitchcock’s masterpiece, most recently knocking Citizen Kane down to number two on The British Film Institute’s The Top 50 Greatest Films of All Time. 3

After half a century of monopolising the top spot, Citizen Kane was beginning to look smugly inviolable. Call it Schadenfreude, but let’s rejoice that this now conventional and ritualised symbol of ‘the greatest’ has finally been taken down a peg. The accession of Vertigo is hardly in the nature of a coup d’état. Tying for 11th place in 1972, Hitchcock’s masterpiece steadily inched up the poll over the next three decades, and by 2002 was clearly the heir apparent. Still, even ardent Wellesians should feel gratified at the modest revolution – if only for the proof that film canons (and the versions of history they legitimate) are not completely fossilised. 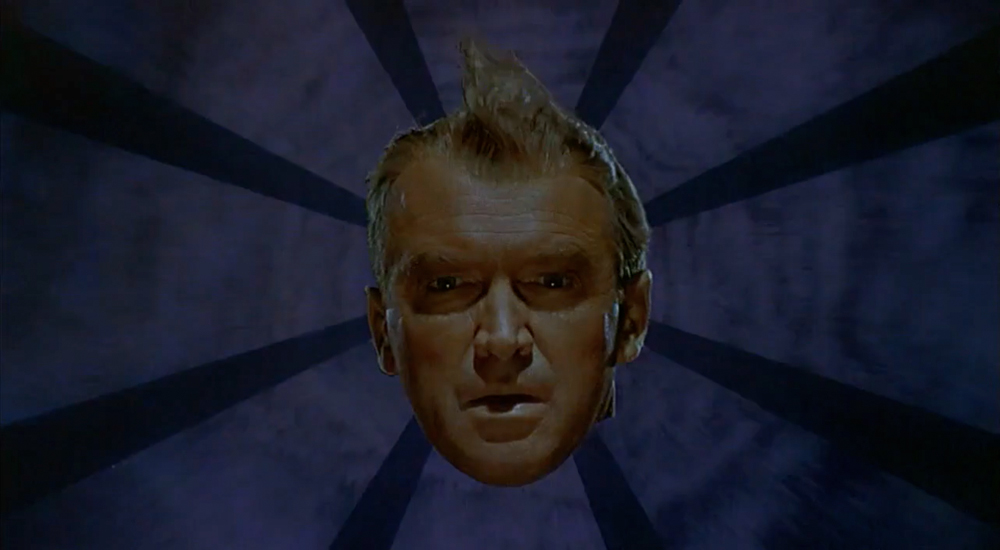 Above all else, Vertigo is a film about redemption. The prologue establishes a world where the bad guy gets away and the good guy gets his teeth kicked in. As a detective, Scottie doesn’t get his man. It’s survival of the fittest and he’s an older man, well past his prime. When he he’s forced into retirement from the accident, he feels no value in society. He didn’t get the bad guy, then fate stepped in and told him he won’t have the chance to redeem himself with the San Francisco Police Department. Did you ever ask yourself why Scottie and the officer were pursuing that suspect? Well, that guy must have done something bad, because they were shooting at him and he didn’t appear to have a weapon. That’s powerful subtext. One simple question can open a door to the darkest corner of your mind. In those terms, Scottie solving the murder of Elster’s wife is the path to reestablishing his self-worth, but more important, it’s the path to redemption. 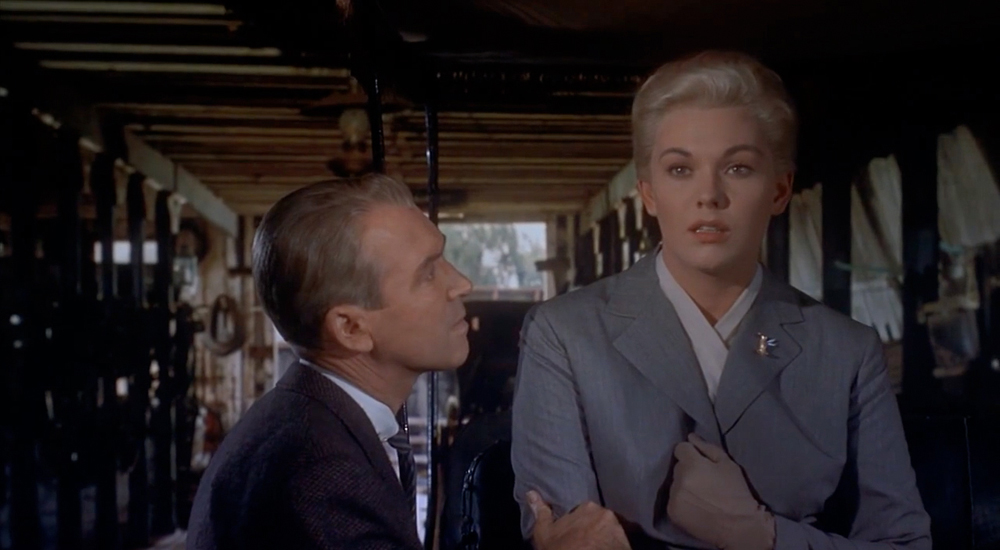 The film literary beats the living hell out of Scottie, both emotionally and physically. He suffers from acrophobia, which triggers vertigo (today, he would most certainly be diagnosed with post-traumatic stress disorder). The simple act of walking up a flight of stairs could trigger it. Think about that for a second. He lives in San Francisco. There are dangers everywhere, especially in a city with streets like Filbert between Leavenworth & Hyde. He has his career cut short by an unfortunate accident, falls for a woman that kills herself,  suffers a breakdown as a result, and then meets a woman who looks just like the love he lost. Yeah, Scottie’s a fighter. I doubt just anyone could come through those kind of breaks triumphant.

Only in times of great stress is your character truly challenged

Scottie falls in love with the woman he’s hired to shadow, moreover, an old friend’s wife. Elster appears to Scottie as a man deeply troubled by his wife’s emotional state. There’s no ethical dilemma in Scottie’s decision to pursue Madeleine. He doesn’t think twice about it. Why? Because his passion for Madeleine is an escape from madness. He tosses aside his values to feel alive, but above all else, he wants to feel hopeful again. The irony, of course, is that he falls for a suicidal woman. But is it really that much of a coincidence? He feels that close to death himself. From that perspective, if he can slay Madeleine’s demons, he’s got a real shot at killing his, too. This addition to the story is one of many pieces that make Scottie one of the most compelling and unique characters ever put on film. 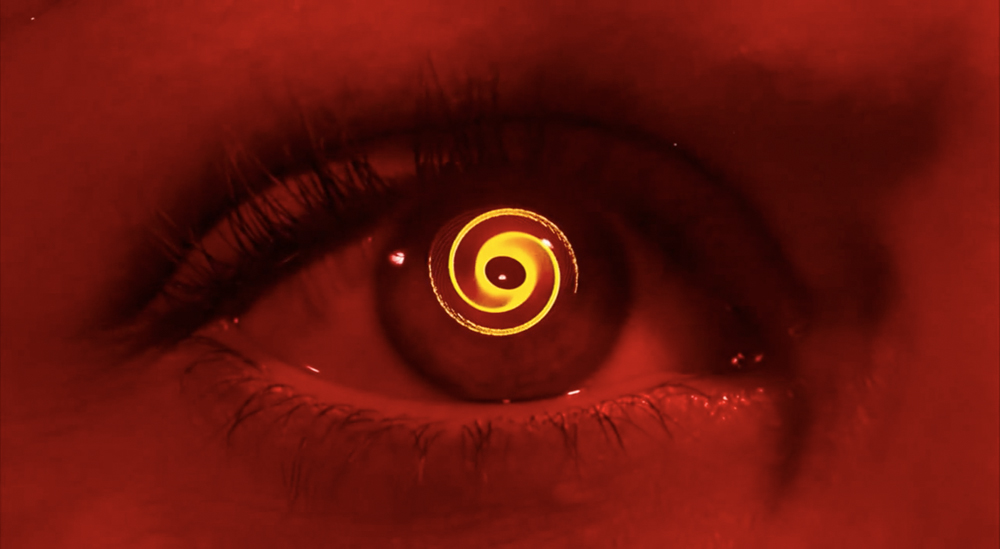 When it comes to theme, this film can open up a wide range of topics. I discussed the theme of self-worth in the opening paragraphs, which is paramount in understanding Scottie’s arc, but this analysis wouldn’t feel complete without mentioning the theme of masks. Perhaps this is the reason Hitchcock chose to open on the face of a woman we never see again. In the first scene at Midge’s apartment, Scottie looks like a guy that’s got it together. Seemingly to terms the event that opens the story, he has a charming dry wit about it, saying, “Midge, do you suppose many men wear corsets,” but a few steps up the ladder and we can clearly see he’s teetering on madness. 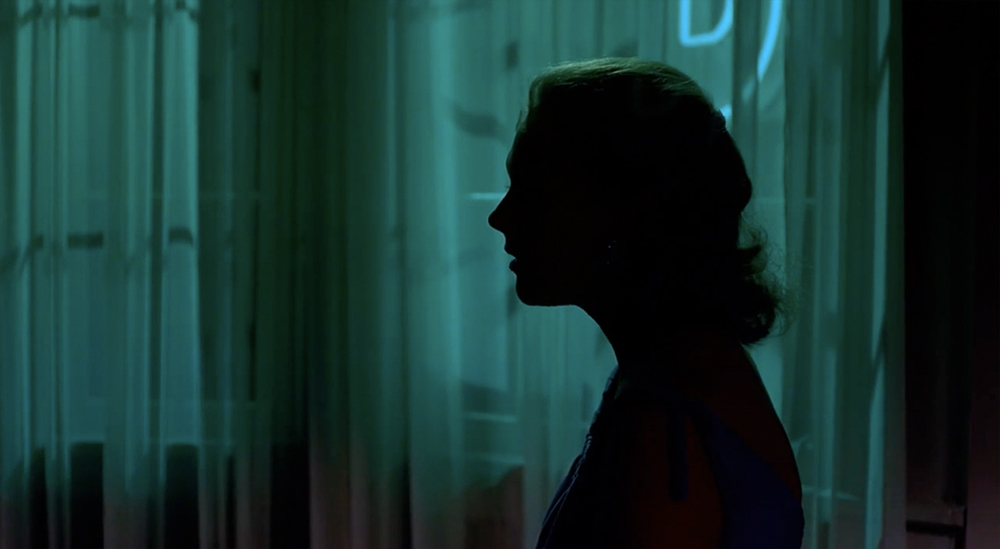 Judy, his object of desire, wears the mask of Elster’s wife. Push that idea a bit further and you could say she’s playing the part of a woman who believes she’s another person at times. That’s not much of a stretch for an actress of her caliber. In the end, you could go to the extent of saying it’s the perfect mixture of guilt and love for Scottie that has her put on a mask to reveal her true identity. Ironically, her fate was to die the way her subject was believed to have perished. 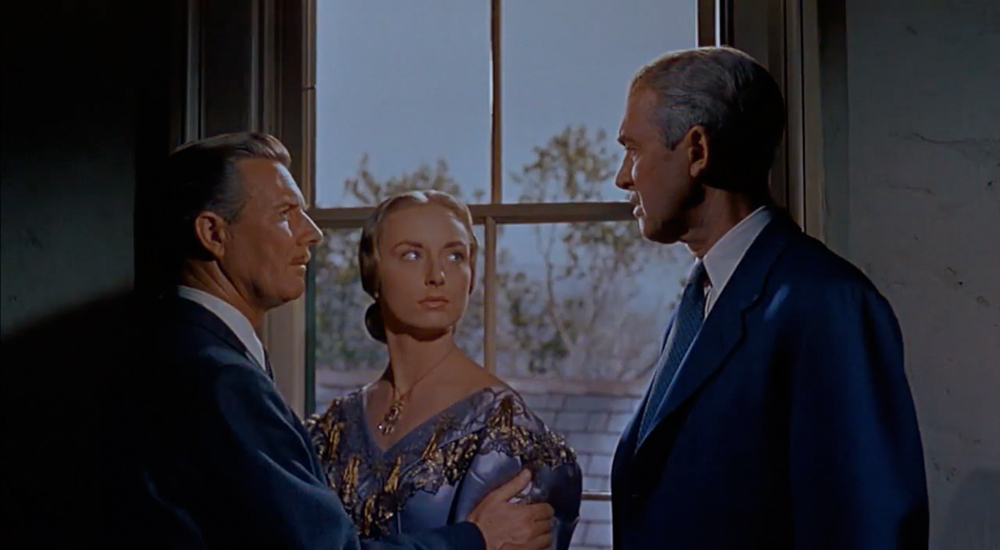 Elster represents himself a reputable businessman who fears for his wife’s safety, only to be revealed as the man who takes her life. His motive is established in his first scene. He married into money, but was forced into running his wife’s family shipping business. She has no more family left, so daddy’s little girl’s dependent on him and him alone. Elster dreams of living in a different time. It’s quite plausible his expectations of a life with money did not live up to the bitter truths. And he hides his true face from everyone, even his mistress, with whom he leaves a necklace, some money, and all the guilt. Even our detective doesn’t figure it all out until Elster’s safe, hiding somewhere in Europe. 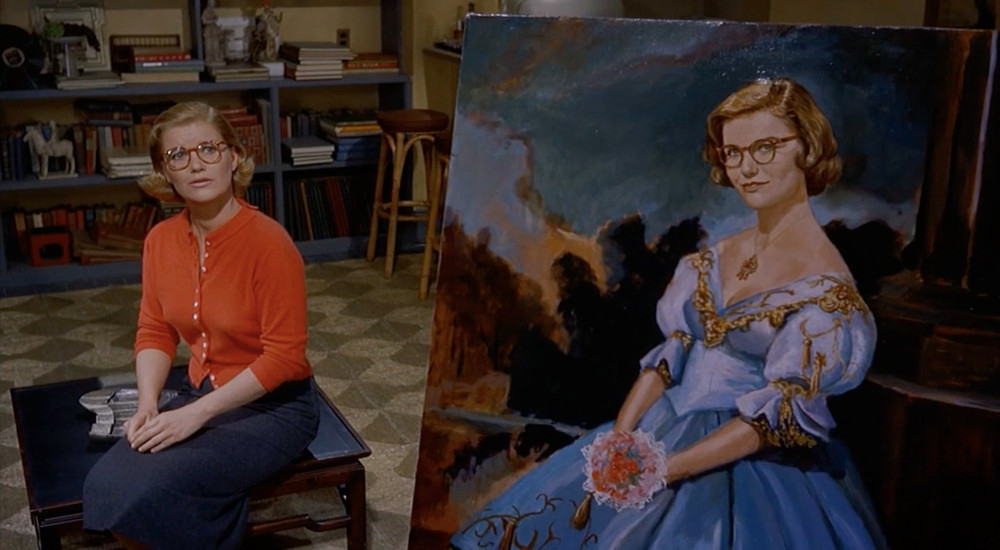 Midge comes across as an independent woman with an impenetrable boundary on her relationship with Scottie. When she shows him her recreation of  “Portrait of Carlotta” with her face, it offends Scottie enough to leave her apartment. Seconds later, Midge has a breakdown, displaying a hidden passion she would never dare reveal. 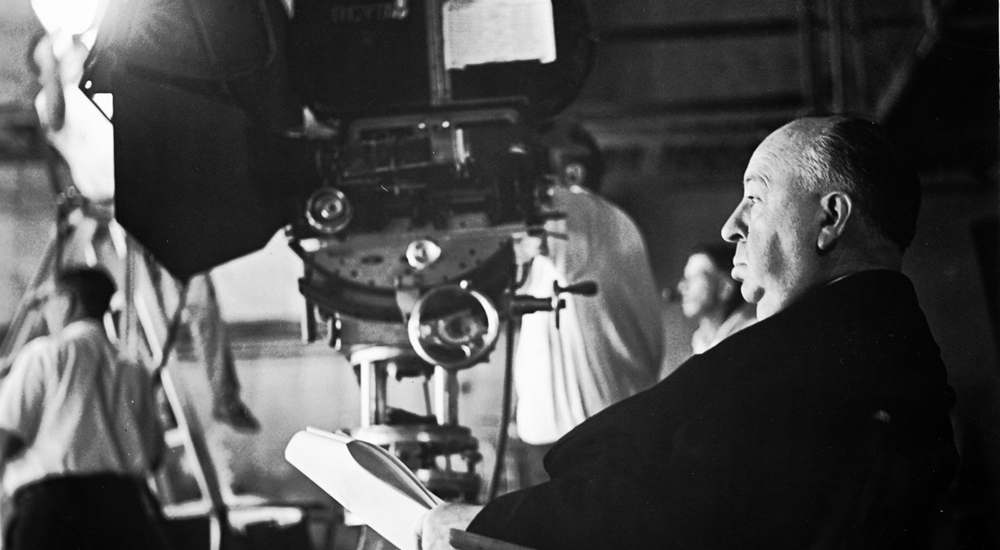 I can see why Hitchcock contemplated using this. The ending is such a shock, a little more resolution may have felt right. In the end, I’m glad he cut it. The final shot of Scottie stepping out on the tower’s ledge signifies he’s not only cured of his acrophobia, but he’s redeemed his identity through solving the crime. No need to say anything else. Below you’ll find the original ending from the screenplay:

Midge is huddled in a chair, listening to the radio. Beyond her, San Francisco at night.

-- was last hear of living, but is now thought to be residing somewhere in the south of France. Captain Hansen states that he anticipated no trouble in having Elster extradited once he is foud. Other news on the local front: in Berkeley three university of California sophomores found themselves in a rather embarrassing position tonight when they were discovered by Police Officer William Fogarty leading a cow up the steps of --

By now Midge has heard the NOISE outside, has uncoiled from the chair and shut the radio. She listens again for a moment, then moves quickly to the table on which are bottles, glasses and ice. She starts to mix a strong highball and does not turn as she hears the front door open. Scottie enters and closes the door behind him. His face is a mask. He moves slowly across the room and stands by the window, with the view of San Francisco beyond him, and looks straight ahead, thinking. Midge picks up the highball, glances over at him, picks up the bottle and pours in another slug. Then moves across the room and holds out the drink. Scottie takes it. Midge moves away, picks up her own drink, sits down, and looks across the room. Scottie stands quietly, immobile, then raises the glass and takes a long pull at the drink. He stares out at the city.

Remember how I mentioned the power of subtext? Hey, look on the bright side: At least Hitchcock was classy enough to frame Stewart from the waste up.

Die-hard Hitchcock fans can listen to the entire interview between Hitchcock and Truffaut by following the links on Open Culture’s post. From their article:

Back in 1962, François Truffaut, the inspiration behind French New Wave cinema, sat down to talk with another legendary director, Alfred Hitchcock. Conducted with the help of a translator, Truffaut’s interviews worked systematically through Hitchcock’s life and vast filmography, moving from his early films shot it Britain (Blackmail, The 39 Steps, Secret Agent), to his later Hollywood productions – North by Northwest, Psycho and Vertigo. In total, the two filmmakers talked for over 12 hours, and, several years later, Truffaut published a now classic book based on these conversations: Alfred Hitchcock: A Definitive Study (1967).

File this one under closing image masterclass. I don’t know how many times I’ve seen the Breakfast … END_OF_DOCUMENT_TOKEN_TO_BE_REPLACED

httpvh://www.youtube.com/watch?v=CofZ7xjGyI8 If there’s one thing to learn from this video, and … END_OF_DOCUMENT_TOKEN_TO_BE_REPLACED

Director Curtis Hanson and his co-writer, Brian Helgeland, have taken a massively complex novel by … END_OF_DOCUMENT_TOKEN_TO_BE_REPLACED

At the very beginning of the movie, we see Scottie vaulting across rooftops, struggling to keep up … END_OF_DOCUMENT_TOKEN_TO_BE_REPLACED

Frank Darabont has often compared The Shawshank Redemption to a Rorschach test. Written and executed … END_OF_DOCUMENT_TOKEN_TO_BE_REPLACED