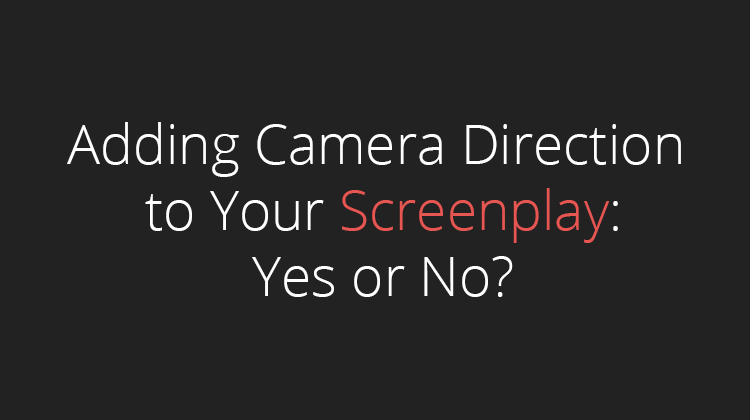 If you’ve ever read a book on screenwriting, you’ve probably heard that adding camera movements to your script is a no-no. The reason for this is simple: novice writers overuse camera movements to the point that they distract the reader and actually impede the reader’s ability to visualize a scene. Instead of teaching writers how to use camera movements effectively in their scripts, it’s easier to just to tell them not to use them at all. But I disagree. If you want to know how to include camera shots and angles the right way, read on.

Before I continue, keep this important fact in mind:  You are not the director. You are the writer. It doesn’t matter if you think that you may someday direct the script or not. That’s the future. Right now, you’re the writer. And you’re a writer that understands that what a writer does is different than what a director does. A director takes written scenes and represents them in a way that’s visual. A writer creates scenes that allows the reader to visualize them. Do you see the difference?

As a screenwriter, you have fewer tools in your box to craft your work than, say, a novel writer does. Novel writers can get into the characters’ heads and tell readers in unlimited words what the character is thinking or feeling. The product that a novel writer generates is what the reader receives. A screenwriter creates a blueprint that will become something entirely different than what she creates—it will transform into a visual medium and therefore, screenwriters must create a product that explains what the audience will see, not what the reader will understand simply from reading the words. In doing that, of course it makes sense that a screenwriter will, at times, include camera angles, shots, or movements to enhance the visual image she is creating.

The difference between a good screenwriter and a bad one is knowing when adding a camera movement or shot will help support the content and when it’s used superfluously. Including that we are in a MEDIUM SHOT on a conversation between two characters is rarely necessary. But saying, ‘We struggle to PUSH THROUGH a crowd of hostile protestors until we LAND ON a young man standing quietly at the back…’ well now, that’s using camera movement to help create a visual image.

File this one under closing image masterclass. I don’t know how many times I’ve seen the Breakfast … END_OF_DOCUMENT_TOKEN_TO_BE_REPLACED

httpvh://www.youtube.com/watch?v=CofZ7xjGyI8 If there’s one thing to learn from this video, and … END_OF_DOCUMENT_TOKEN_TO_BE_REPLACED

Director Curtis Hanson and his co-writer, Brian Helgeland, have taken a massively complex novel by … END_OF_DOCUMENT_TOKEN_TO_BE_REPLACED

At the very beginning of the movie, we see Scottie vaulting across rooftops, struggling to keep up … END_OF_DOCUMENT_TOKEN_TO_BE_REPLACED

Frank Darabont has often compared The Shawshank Redemption to a Rorschach test. Written and executed … END_OF_DOCUMENT_TOKEN_TO_BE_REPLACED