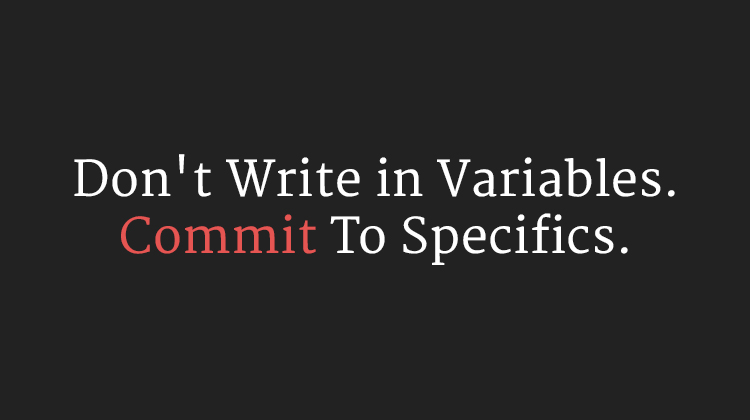 When I’m coaching a client, I usually run into some version of this conversation:

CLIENT: I’m stuck on my script. I don’t know where to go next.
ME: Okay, start from the beginning. How does it start?
CLIENT: Alright, we meet Arthur, and he’s a shady, charismatic salesman. When we meet him he’s either on a sales call or talking to his boss. Anyway–
ME: I’m going to stop you right there. Which one is it?
CLIENT: Well, I haven’t decided.
ME: Well, decide. You’re the god of this universe. If you say something happens, it happened. In life we’re not maybe in a Starbucks, maybe in a house. We’re in a Starbucks. My name is Matt. Your name is Tim. Are you maybe from Arkansas, or maybe from Connecticut?
CLIENT: Okay, I get it. But which one?
ME: I don’t know, flip a coin. If he’s selling we see his charisma, we see him really being a good salesman with a hint of the shadiness. If it’s with his boss, his acumen gets framed by an outside observer. He’s a good salesman, but a maverick, or whatever.
CLIENT: Fine. He’s at a pitch.
ME: What’s he selling? Who’s he selling to?
CLIENT: Um, I guess he sells photocopiers. He’s selling to the office manager at a medical clinic. Oh, actually, there’s a health scare later, maybe I can set that up here.
ME: Great. You picked a specifics and you’re getting more specifics.
CLIENT: What if I picked the wrong one?
ME: Then start over. But commiting to one direction helps you grow, it generates new ideas, good ideas. Even if you change stuff, you’ll still have the ideas you generated. So what happens next.
CLIENT: Well, he goes home. And his wife is either a Maria Bello type or a Gillian Jacobs type.
ME: Well, which one is?
CLIENT: Oh damn it.

Writers often outsmart themselves. They know that everything changes in the rewrite so they keep everything loose, like a Mad Lib or a variable. Writing in variables has a certain efficiency to it, but it doesn’t work. It’s like building on sand. Real people aren’t variables. Real back stories aren’t variables. Real locations aren’t either. So when you make anything a variable, it’s like you’re building on sand.

Rather, commit to a direction, any direction. You’ll get more mileage out of committing to a specific and following it through to the bitter end than you will by constantly keeping your options open. Be specific so characters have specific things to react to. It’s better to get lost on a few false starts because then you’ll gain experience. You won’t gain anything if you never make a choice.