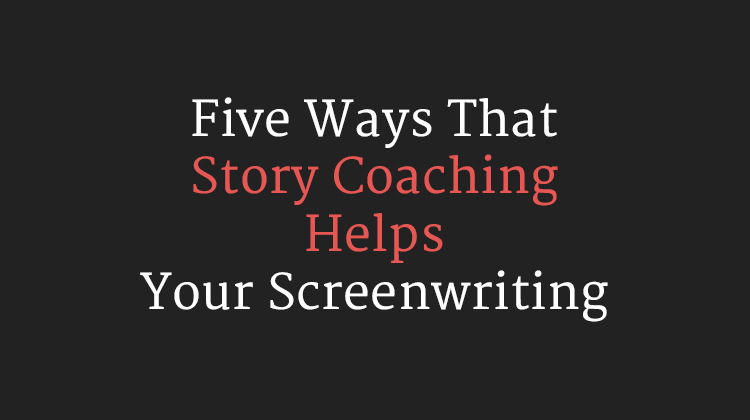 Story coaching is the best, most efficient way to get better as a writer. It begins when a writer hires me for a specific project. They’ll tell me what they want to accomplish and what’s preventing them from executing it to their satisfaction. I’ll lay out a series of exercises and actionable steps that slice the huge project into a series of small, manageable ones. It’s an individual process, every writer is different, every writer benefits from a different approach.

Writing without coaching is like buying a home weight bench. Hiring a coach is like hiring a personal trainer. It’s entirely possible to get results alone in your basement, but that’s not everyone’s preference. Some people like getting instruction on the best and most efficient way to do an exercise or gain a skill. Some people benefit from the external motivation that coaching provides. And even the most experienced weightlifter benefits from a spotter, a sounding board, or a third party to tell them when they’ve crossed the line from muscular to human cartoon character.

I’m running a 50% special on coaching until 10/31/14. While you’re considering it, here are five ways coaching can help your screenwriting. Click here for more info.

Most writers treat writing as a hobby. They’ll set a deadline (I’ll finish this script by Christmas!). More often than not, they’ll blow the deadline and no one cares. Hiring a story coach keeps you accountable. You’ll have someone to watch you, keep track of your progress and discover patterns in your excuses. The simple fact of investing money into your writing creates a deeper psychological investment in accomplishment. Also, humans are social animals – having a coach creates an expectation and an audience, which pushes us to work harder than when we’re alone.

Willpower is finite, which is why people can quit smoking, eating sweets, or drinking, but not all at once. Every one knows how to get six pack abs: you cut calories, burn fat, and work your core. Despite the simplicity, despite the obvious social benefits that come with having six pack abs, I don’t have them, nor do most people. People spend millions on gym memberships, workout equipment, etc, but these things do no good unless they’re paired with discipline. Coaching helps. The simple fact of investing resources in writing spurs creativity. Coaches provide an outsider’s perspective that can identify sticking points and remove the psychological obstacles that make writing difficult.

Beginning writers tend to put a lot of effort into their plot, character, and structure, but they’ll spend less time thinking of how their writing will be recieved by an audience. Early drafts tend to be mnemonic triggers – the writer envisions a red Chevy Nova, dents in the back, a scorched out backseat, but they’ll describe it as, Jim goes to his car. This creates a disconnect between writer and audience, especially if the qualities of the car will later influence the plot.When I’m reading other people’s material I often get confused.

ME: Why does Carol put up with Bob’s drinking here? AUTHOR: I know it’s out of character, but I’m thinking that the scare she had in the carnival scene has made her more tolerant. ME: Huh, okay, I see that. Make sure that’s communicated in the script. AUTHOR: Well, I did in the BB gun speech… oh, I took that out.

A lot of writing is about making sure the story makes sense. Everyone makes this mistake, from beginners to pros. We forget that the audience isn’t in our head, reading our minds. That’s why having a sympathetic reader helps audit and analyze a script.

CLIENT: Hey Matt, I was thinking about the Pittsburgh project. Would it work better if Marge was Yorick’s boss. ME: Wait, I haven’t heard from you in years. Is this that one project you were telling me about before you moved onto that sci-fi thing? CLIENT: Yeah. ME: Hang on, let me check my notes… yeah, that’s a fantastic idea.

If you have a regular coach, that person ends up being the world’s leading expert on your writing. You get a sounding board, someone who knows almost as much about the world of your stories as you do. That’s really useful, it’s all the benefits of having a partner with none of the drawbacks (if you hire me as a coach, your material remains wholly and entirely yours).Good coaches are very literate about pop culture. They can tell you which movies are useful case studies, which movies failed, and most importantly, they can tell you if your idea is exactly like something that came out five years ago. This happens way more than you would think.

How many times have you heard some variation of, “You need to get out of your head,” “Just have fun with it,” or “Be yourself”? These bits of advice are well intentioned, but not actionable. They’re hard to implement.Good coaching is actionable. I like to break writing into digestable chunks, and offer exercises to explain concepts.

A lot of writers will pitch a crazy sci fi world with too much setting. I’ll have them pitch their idea in another genre to identify the difference between story and world building. Some writers are big on plot, but not texture. Color/Advance helps with this. Some writers will keep everything vague. They benefit from exercises that force them to commit to details. Some people are too rigid, they benefit from a little improv. The list goes on. When I’m coaching, I like to draw on my experience in writing, acting, improv, and even more esoteric connections, like partner dancing or cooking.

Screenwriting is all about imagining something vividly and recording it in a way that allows it to communicate. Coaching is about removing the barriers that make this more difficult than it out to be.

File this one under closing image masterclass. I don’t know how many times I’ve seen the Breakfast … END_OF_DOCUMENT_TOKEN_TO_BE_REPLACED

httpvh://www.youtube.com/watch?v=CofZ7xjGyI8 If there’s one thing to learn from this video, and … END_OF_DOCUMENT_TOKEN_TO_BE_REPLACED

Director Curtis Hanson and his co-writer, Brian Helgeland, have taken a massively complex novel by … END_OF_DOCUMENT_TOKEN_TO_BE_REPLACED

At the very beginning of the movie, we see Scottie vaulting across rooftops, struggling to keep up … END_OF_DOCUMENT_TOKEN_TO_BE_REPLACED

Frank Darabont has often compared The Shawshank Redemption to a Rorschach test. Written and executed … END_OF_DOCUMENT_TOKEN_TO_BE_REPLACED