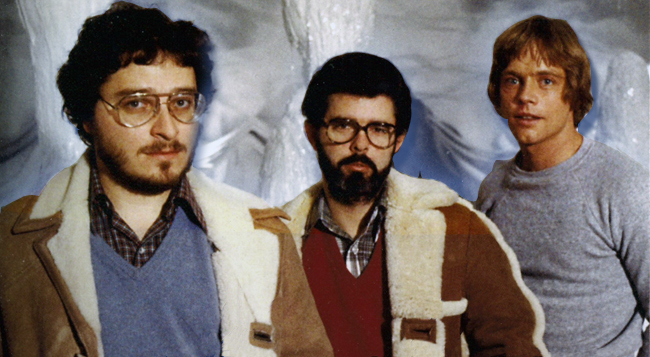 Thanks to the Writers Guild Foundation’s new online exhibit, Scribble to Screen, we can now view Lawrence Kasdan’s handwritten notes from the greatest film in the Star Wars franchise.

Kasdan appeared on George Lucas’ radar after selling his script for Continental Divide to Steven Spielberg. Though it was released the year after The Empire Strikes Back, Kasdan was first hired to write Raiders of the Lost Ark (a screenplay he wrote in Spielberg’s office while Steven shot 1941). It was through a rather unfortunate event, the death of the Empire’s original screenwriter Leigh Brackett (science fiction author and legendary screenwriter of such films as The Big Sleep and Rio Bravo — read her ESB draft here), that he was hired to pen the sequel to A New Hope.

I’ve always held Kasdan in high regard as a screenwriter. He was associated with two of my favorite films from childhood, Empire and Raiders. The Big Chill is to my thirties what The Graduate was to my twenties. Though I cannot appreciate it now, I’ll probably love Darling Companion when I’m tired and gray. The notes in the collection, featured below, provide welcome insight into the creative process of one of Hollywood’s most influential screenwriters.

The opening crawl for every Star Wars film was based upon crawls used in the original Flash Gordon and Buck Rogers serials. Though he was more than capable of performing the task, there’s a slight question in my mind whether Kasdan wrote Empire’s brief backstory or not (I’m basing this on no evidence whatsoever…besides the fact Brain De Palma wrote the crawl for A New Hope). Whether he did or didn’t, his initial vision, focusing the opening image on Hoth’s icy terrain instead of space, is much different than what ended up on the screen. 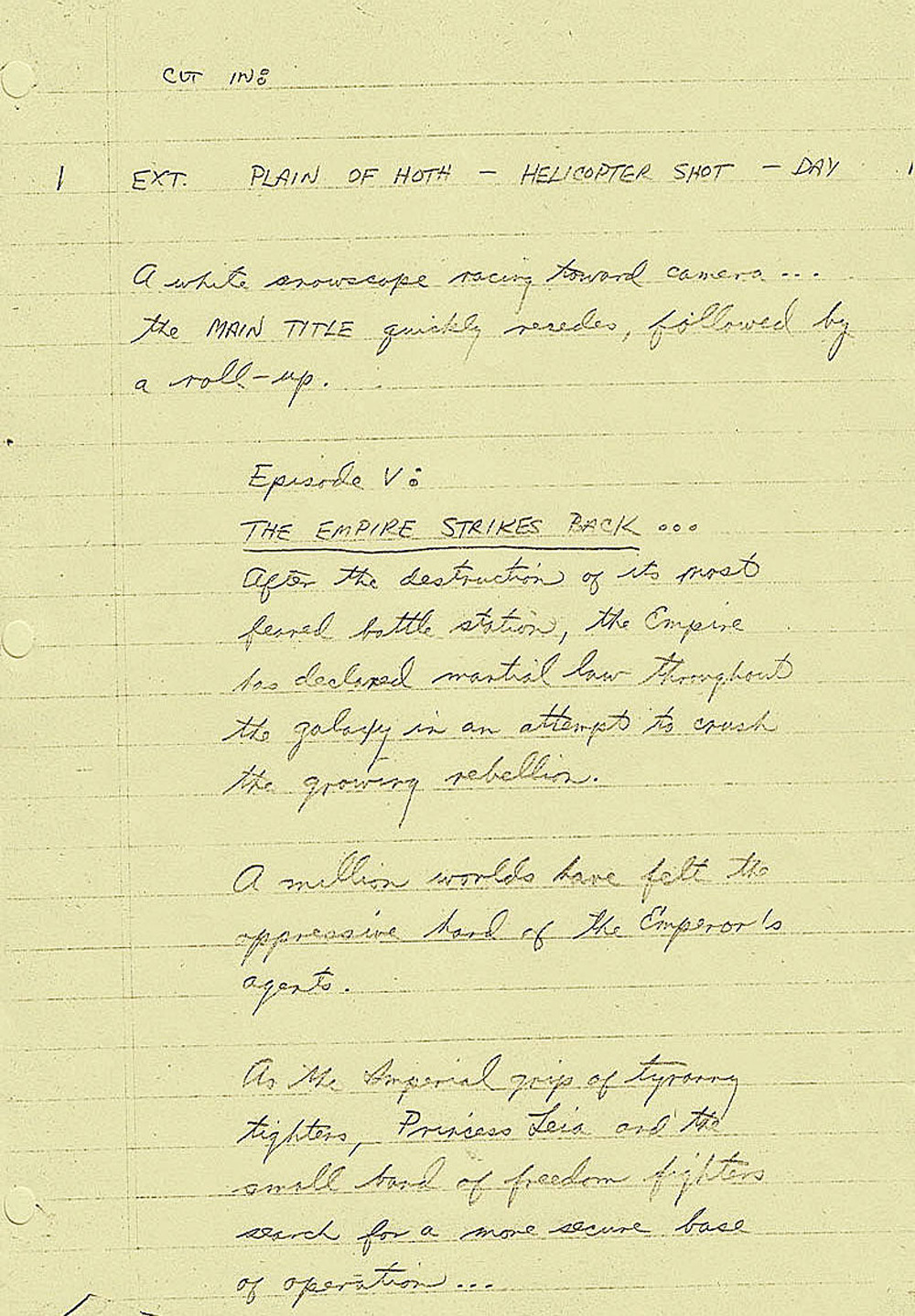 A white snowscape races toward camera ... the MAIN TITLE quickly recedes, followed by a roll-up.

The Empire Strikes Back ...

After the destruction of its most feared battle station, the Empire has declared martial law throughout the galaxy.

A million worlds have felt the oppressive hand of the Emperor as He attempts to crush the growing rebellion.

As the Imperial grip of tyranny tightens, Princess Leia and the small band of freedom fighters search for a more secure base of operations ...

The roll-up disappears into the bleak horizon.

The final version, as depicted on screen, highlighted Vader’s pursuit of Luke, foreshadowing their eventual confrontation:

You Could Use A Good Kiss

At the time Kasdan was hired, he was known for two scripts: The Bodyguard, sold to Warner Brothers in the mid-70’s as a vehicle for Steve McQueen and Diana Ross (eventually released in ’92 with Kevin Costner and Whitney Houston); Continental Divide, a romantic comedy later released with John Belushi and Blair Brown. Irvin Kershner, Empire’s director, was known for gritty, dramatic films, so the conflict between Han and Leia was territory both Kasdan and Kershner were familiar with. It’s the only film of the franchise that succeeds in that regard. None of their exchanges feel forced (pun intended), their relationship evolves on screen around a strong external goal, and their love for one another makes the tragedy more accessible and compelling to audiences. 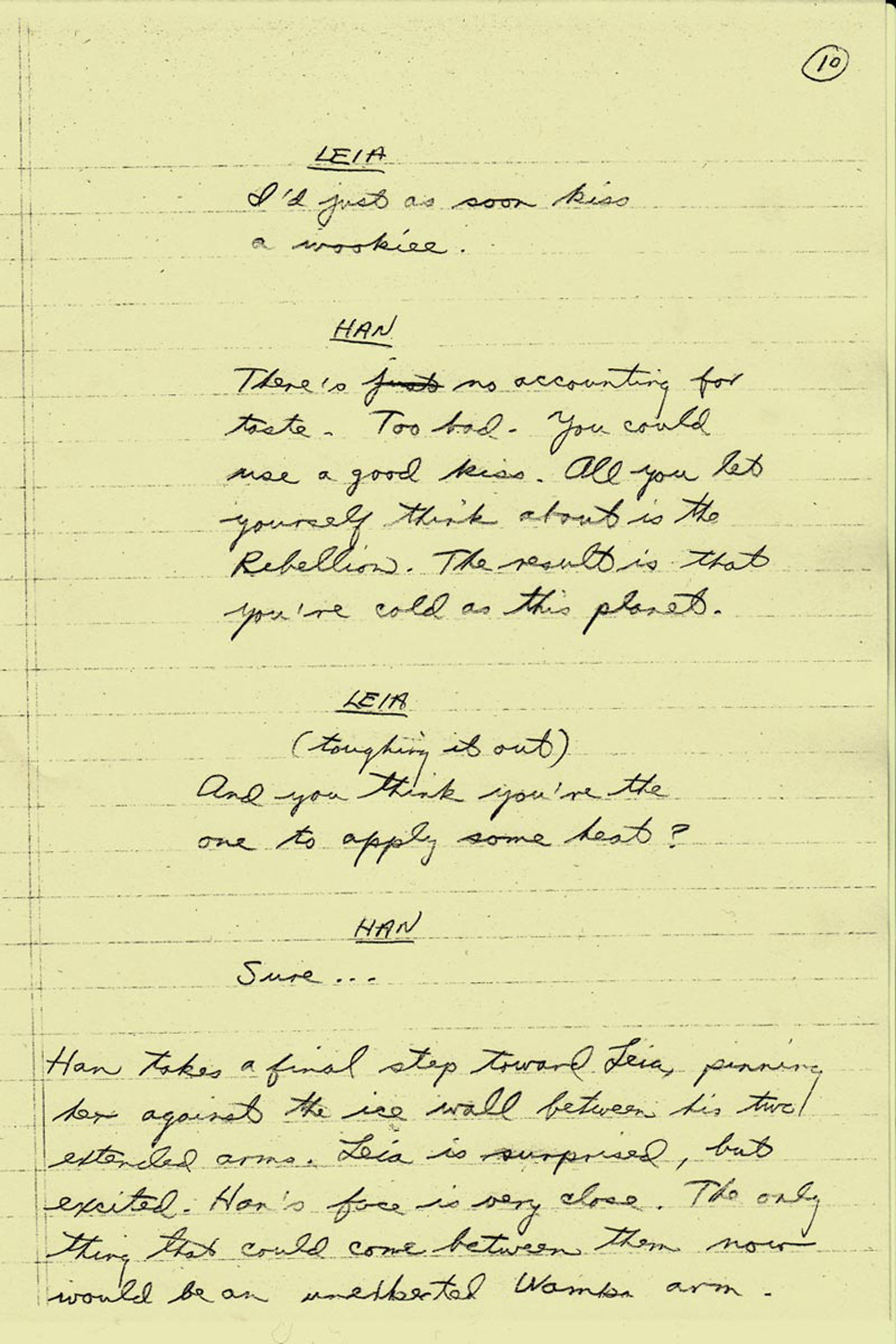 Jabba the Hutt and the Sacrificial Tauntaun

Outside of the fact the tauntaun was originally written as a snow lizard, the last line on the page intrigues me the most. Early in the film, Han reveals his debt to Jabba the Hutt, providing exposition for Vader’s association with Boba Fett and Lando’s betrayal. Kasdan relieves us from Luke’s dire situation with Han’s appearance, but wisely ends the scene with a more compelling twist. Simply put, the car is dead, Luke’s bleeding, and it’s getting dark. The lines below were still present in the fourth draft, but the subject of Jabba was later reserved (or cut), more appropriately, for Han’s explanation to General Rieekan for leaving Hoth. 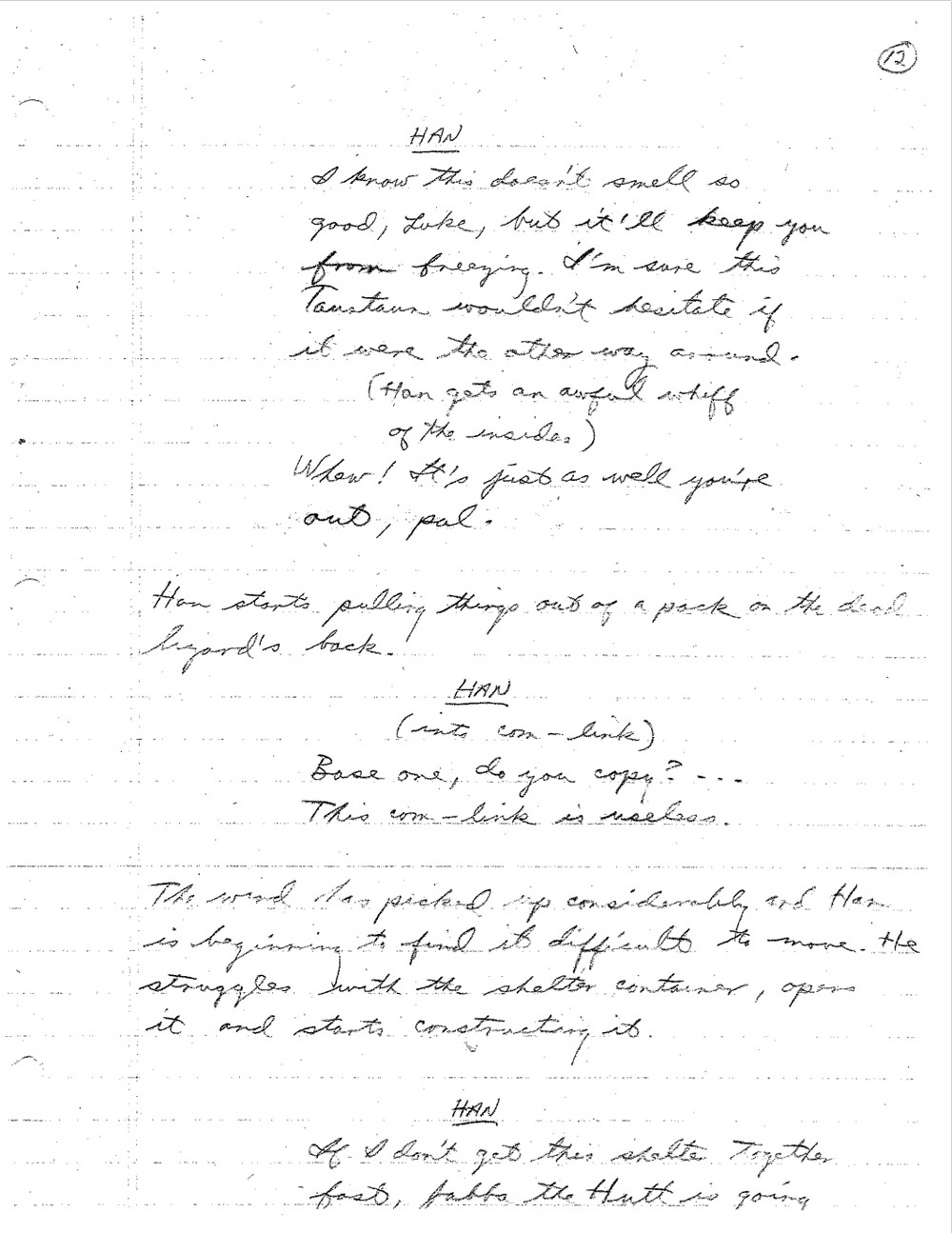 Of all the pages available, the following provides the most insight into Kasdan’s creative process. There’s not much dialogue. Half of the page has a line through it. After reading through the scribble, my brain took some time helping me I.D. the scene, a task I seemed to perform in an instant with the others. It’s as if he were frustrated and wanted to move on, quickly imposing all the dramatic tension required of the scene for his return. 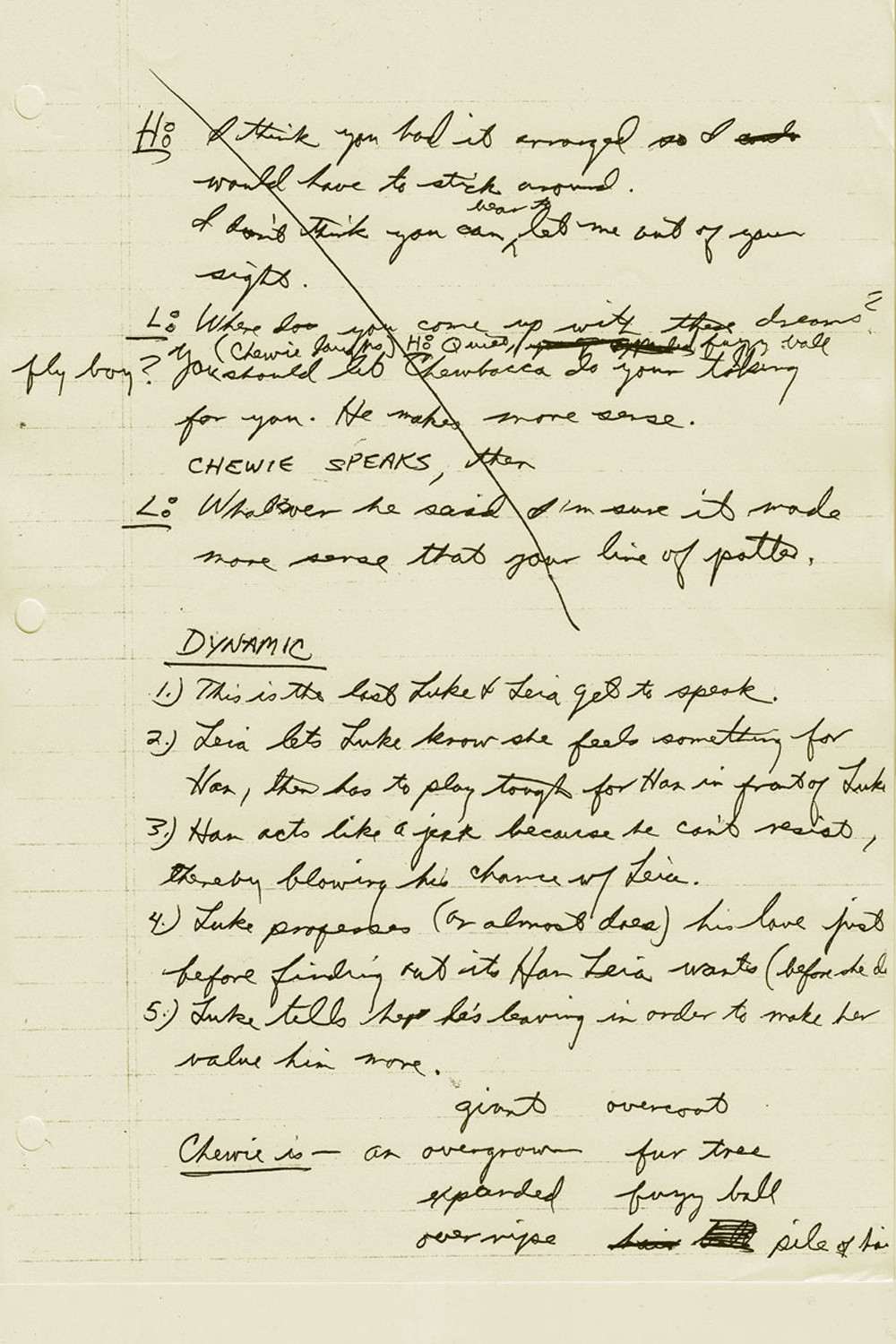 The next page is from either the second or third draft of the script (Yoda had the name of Minch in the Brackett draft). By the time you get to draft número quatro, Yoda’s speech patterns, also known as “Yodish,” resemble that of the finished product. It’s an aesthetic choice, just like Yoda designer Stuart Freeborn’s decision to base Yoda’s eyes on Albert Einstein’s or Frank Oz’s choice to base his voice on Fozzie the Bear (that last part is a joke…I think).

From a Grammar Girl article on Yodish:

Typically, standard English sentences follow a subject-verb-object order. For example, we would say “Han Solo digs Princess Leia.” “Han Solo” is the subject, “digs” is the verb, and “Princess Leia” is the object. Han Solo-digs-Princess Leia: subject-verb-object. That’s the typical pattern, but it’s not unheard of for English speakers to deviate. For example, you could say something like, “She wants to fight, and fight she will.” That “fight she will” part is just like Yodish, but we’re using it for emphasis. Carson also points out that “poets and lyricists frequently deviate from standard word order because of meter, rhyme, or aesthetics. For example, ‘Over the river and through the woods, to grandmother’s house we go’ is Yoda-esque in its construction, yet English speakers sing it without a thought.” “With this ring, I thee wed” is another example of something that deviates from the subject-verb-object construction, but that most people still consider real English.

Carson also notes that although Yoda shifts around sentence elements, he doesn’t do so randomly. He tends to use object-subject-verb word order*, as in “Princess Leia, Han Solo digs,” and he does not break up syntactic units, like preposition phrases or infinitive phrases. For example, he keeps together phrases such as “to continue your training” and “to the dark side.” 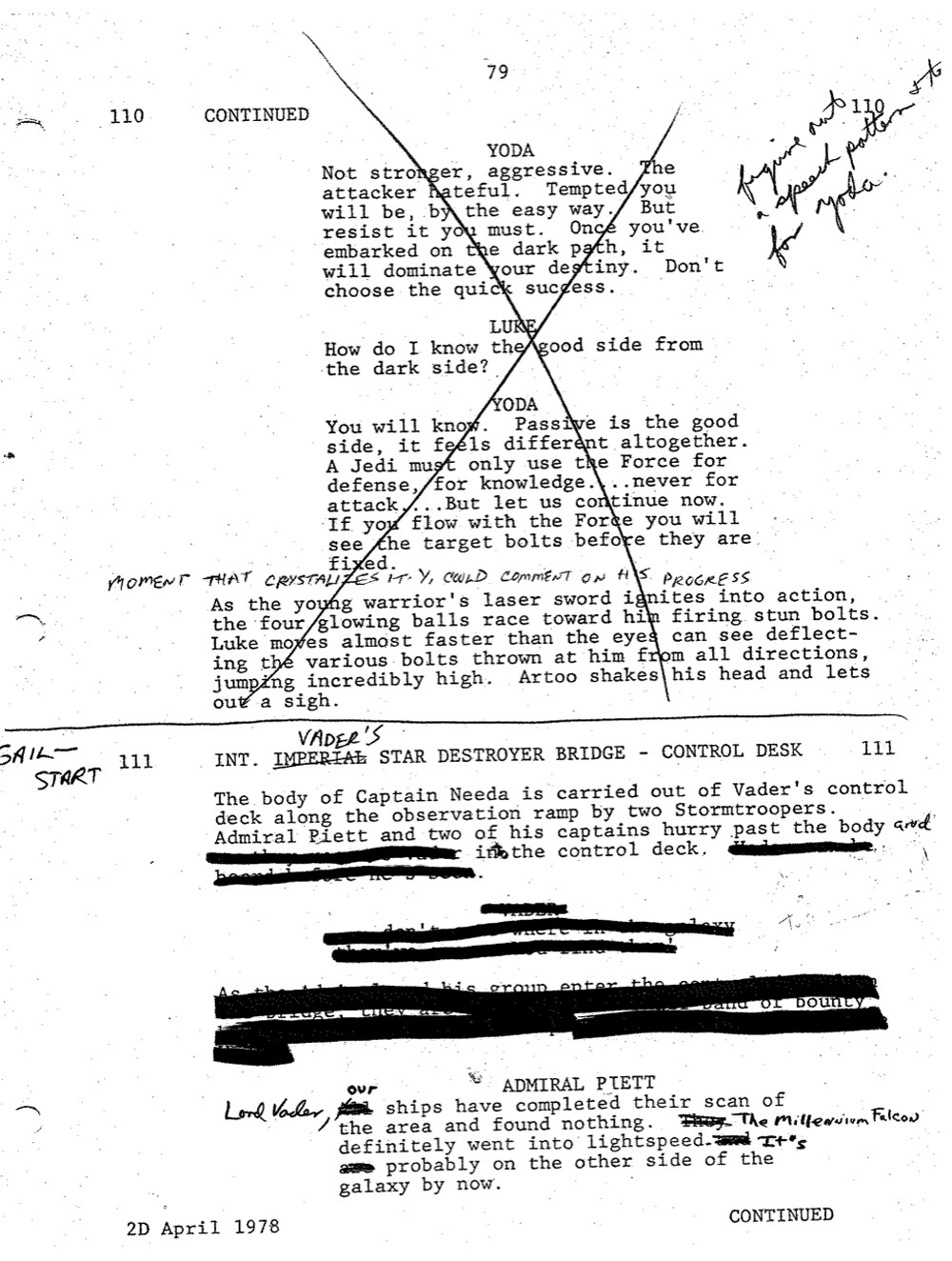 When Will I See Him?

After a ferocious duel that ends with Luke leaving with one hand less than when he arrived, not to mention more Daddy issues than a little princess, Darth Vader comes out of the closet so to speak, revealing himself to be completely capable of reproduction, but more important, he reveals himself as Luke’s father. Han Solo’s good friend betrays him, not for a woman, but for a city in the clouds. Leia’s cold, sometimes down-right hostile to Han’s affection, but later falls for him like no man before. Yoda’s reveal uses the same dramatic principle: Here’s something in front of you that’s much more than it seems. The actions prior to that, testing Luke’s patience (force = calm / dark side = anger), all operate around the character’s arc. Yoda’s introduction feels like another strange, quirky creature in the Star Wars universe, but when he’s revealed as the Jedi who trained Obi-Wan, not tiresome comic relief, it tells the audience that the smallest things in this film will surprise you the most. Yoda’s reveal is a clear metaphor for not judging a book by its cover, even for some of the youngest viewers. 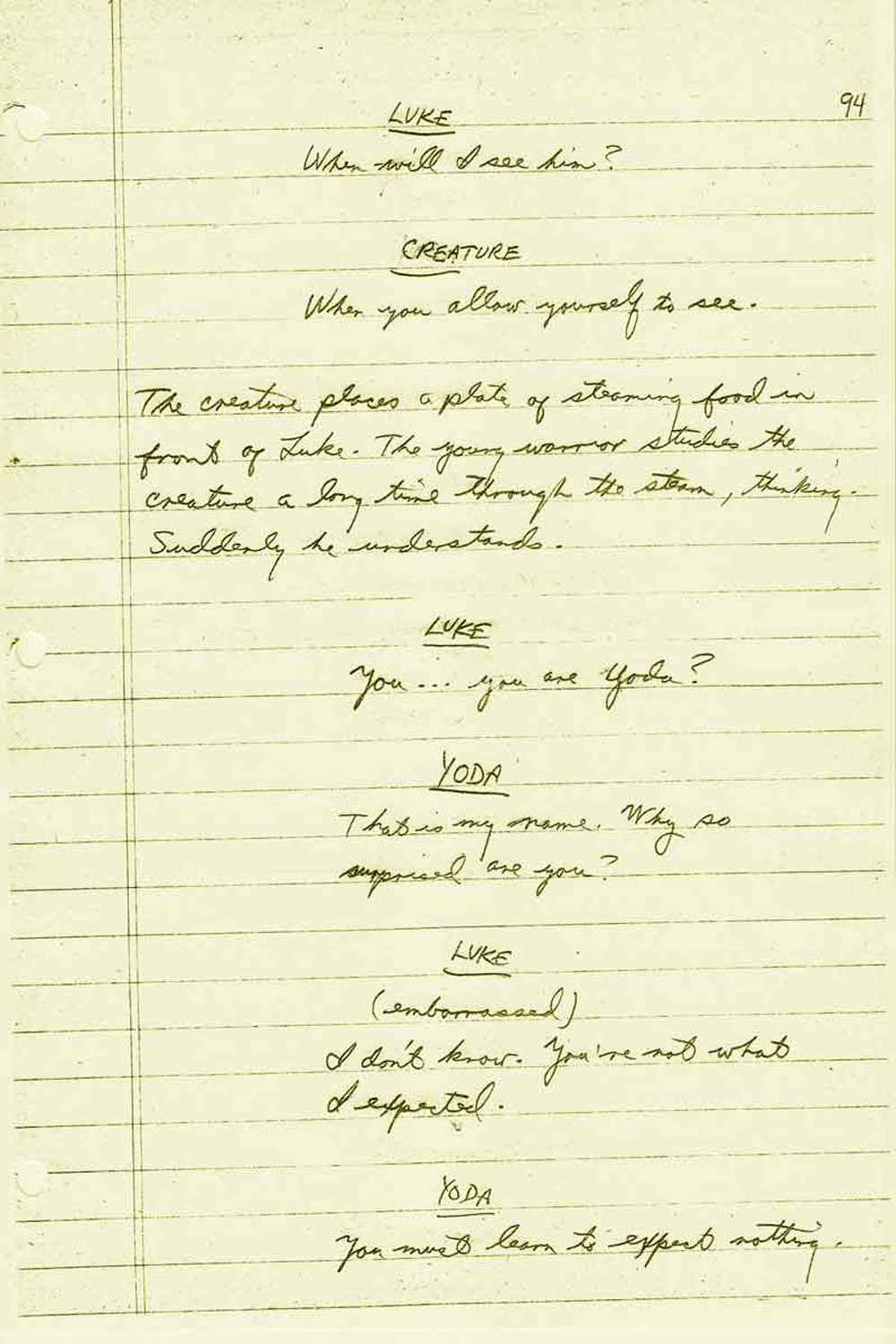 At this point, Kasdan had established Yoda’s speech patterns and was playing around with the mentoring of Luke. Lines like “luminous beings are we” and Luke squinting to see the aura of the Force ending up being scrapped, but the ideas resonated throughout the training sequences on Dagobah. 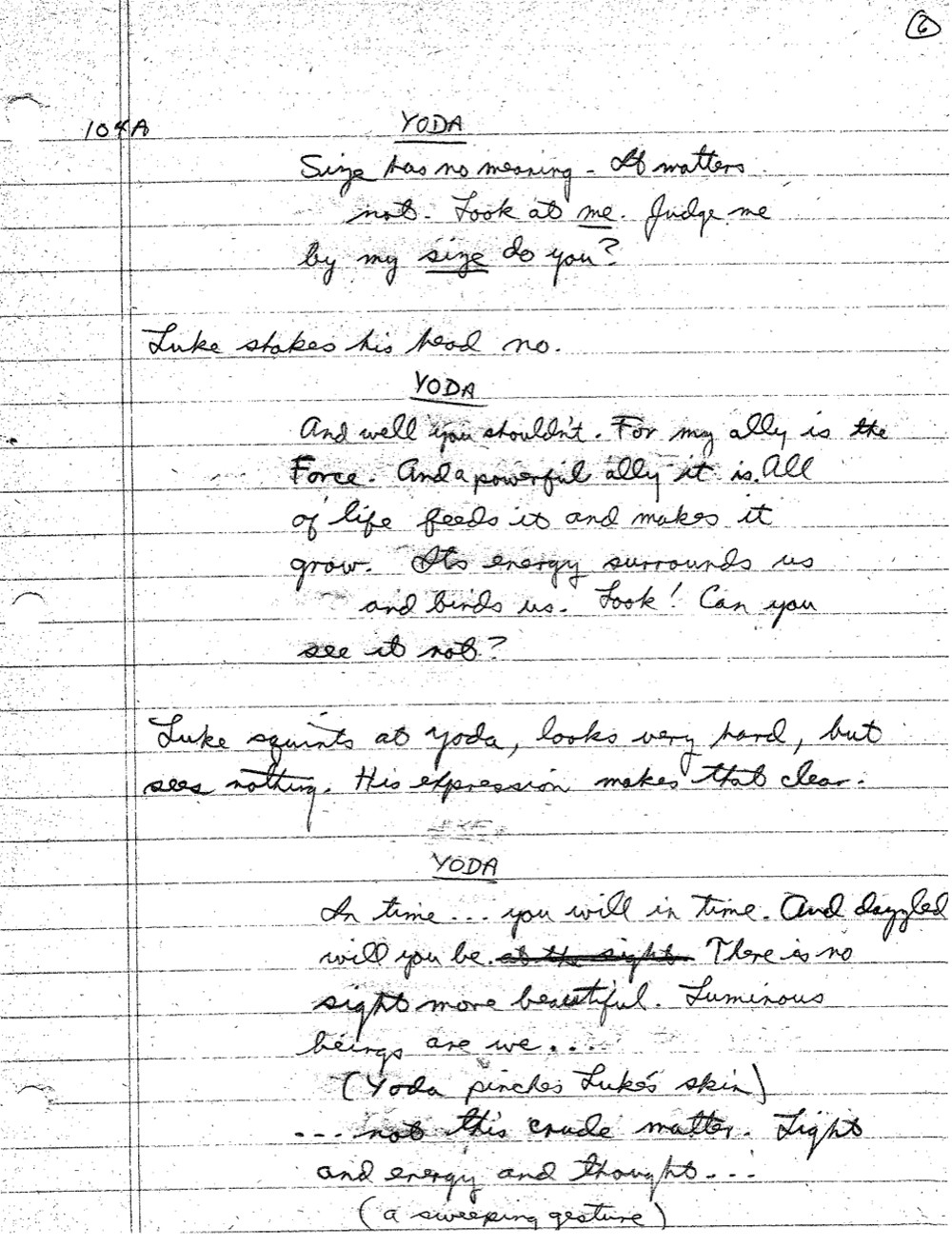 It’s widely known that Kasdan, Irvin Kershner, and Harrison Ford all believed it went against Han Solo’s character to tell Leia he loved her, even as he faced probable death. I’d be lying if I said this scene didn’t have a great effect on my development. I have fond memories of my grandmother taking me to see it in the theaters twice, repeated viewings on VHS, and my first girlfriend spitting in my face moments after I unknowingly broke up with her. I’m positive it’s the sole reason I would give Harrison Ford my last dollar if the man asked. After all, if not for him, I would not be the adultescent I am today. This is one of the best known examples of a group dynamic working, and working really damn well at that, as it wasn’t Lucas, Kershner, nor Kasdan who came up with one of the most iconic lines in movie history:

Originally, Lucas wrote a scene in which Princess Leia professed her love to Han Solo, with Han replying “I love you too.” Harrison Ford felt the characterization was not being used effectively, and Kershner agreed. After several takes, the director told the actor to improvise on the spot, and Ford changed Solo’s line to “I know.”

George Lucas believed Han should have said, “I love you, too.” Ugh. So, thanks to Mr. Lucas for having the foresight to hire Harrison Ford, because the next best line would have, more than likely, erased Arnold Schwarzenegger’s most beloved catchphrase. The fourth draft from October of ’78 features the same exchange between Han and Leia, as seen below. 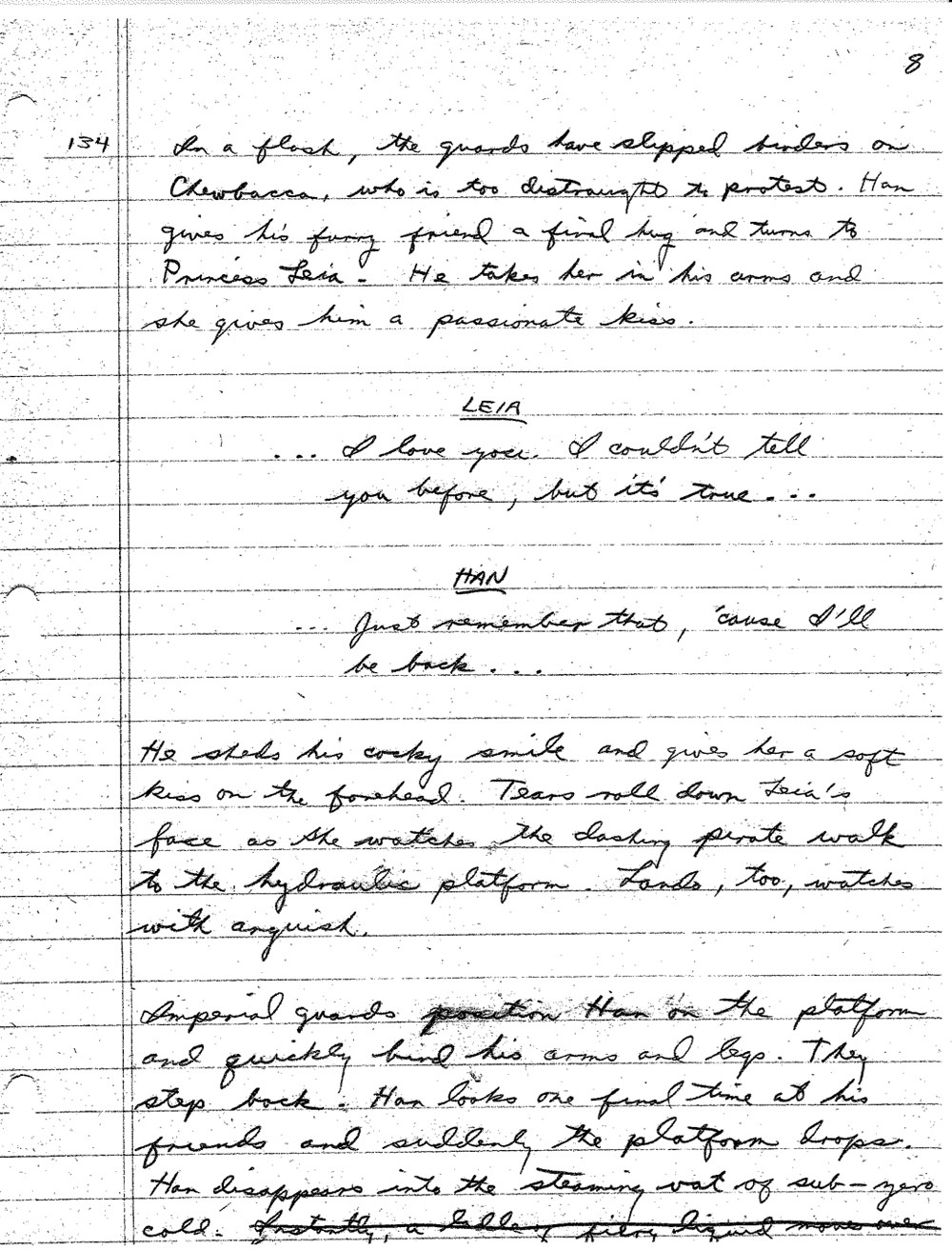 Here’s the scene as it played out on the big screen:

File this one under closing image masterclass. I don’t know how many times I’ve seen the Breakfast … END_OF_DOCUMENT_TOKEN_TO_BE_REPLACED

httpvh://www.youtube.com/watch?v=CofZ7xjGyI8 If there’s one thing to learn from this video, and … END_OF_DOCUMENT_TOKEN_TO_BE_REPLACED

Director Curtis Hanson and his co-writer, Brian Helgeland, have taken a massively complex novel by … END_OF_DOCUMENT_TOKEN_TO_BE_REPLACED

At the very beginning of the movie, we see Scottie vaulting across rooftops, struggling to keep up … END_OF_DOCUMENT_TOKEN_TO_BE_REPLACED

Frank Darabont has often compared The Shawshank Redemption to a Rorschach test. Written and executed … END_OF_DOCUMENT_TOKEN_TO_BE_REPLACED