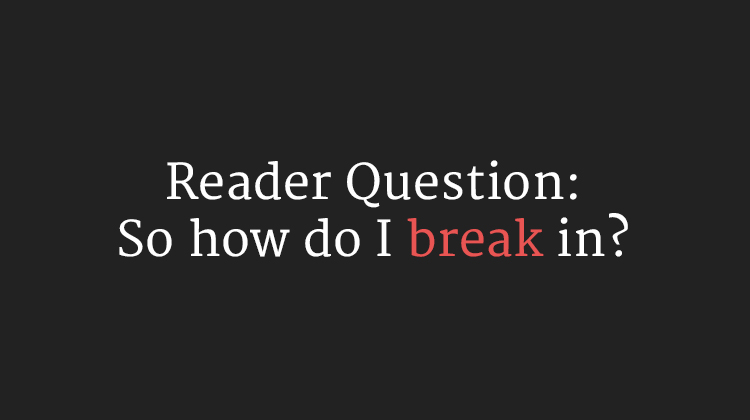 READER: I noticed this in your about me section:  “I’ve been hired for a variety of small rewrites and polishes, but none of my features have been produced.” Damn if even you haven’t gotten produced, this business must be really hard. Any tips of getting your spec produced? Are you saying sometimes even really good specs get ignored?

ME: This gets complicated.

If these answers make your head hurt and make you realize that the screenwriting universe is bigger, more complex, and more nuanced than you realized, well, that’s good.

READER: So are you saying in order to get your good spec produced, it needs to have good marketing? By that I mean: Marketing is kind of communicating, bad marketing = bad communicating? So what I’m saying is, even if you have a fantastic script, you still need connection in the industry in order to have a chance to be produced?

ME:It sounds like you’re a little sales focused. The glimmer of Hollywood gold can drive anyone mad. Let me ask you a question: specifically why would someone make your script over another one?

READER: Well the only reason why someone would make my script over someone else’s might be that my script is better than theirs.

ME: That’s another complication. Let’s say Company 1 buys script A over script B because they have a deal with Seth Rogen and it’s a better fit.

Company 2 buys script C over script D because script d has gay themes and they fear it won’t play well in China.

Are scripts B and D worse for not getting made?

READER: Okay so I get the point, but what is there that I can do about it?

ME: 1) Know the market. There are lots of nuances and wrinkles to it, like the ones I just mentioned. People say “write contained horror,” or “don’t write a musical,” but this advice becomes more useful if you understand why it’s being offered and the times when it tends to be right or wrong.

Paradoxically, disregard the market. If you’re constantly writing to please other people, you set yourself up to fail. Some will say “be bold,” as if writing with a bold authorial voice is all you need. There’s a grain of truth in that over simplification.

There is so much conflicting information about screenwriting out there, and it’s all very nuanced and can seem mutually exclusive. That’s where coaching comes in. I answer questions directly and usefully without oversimplifying, help writers polish their material, and get them set up to succeed and learn on their own. It’s dangerous to go alone! The value of coaching is that it provides the training that can help.

File this one under closing image masterclass. I don’t know how many times I’ve seen the Breakfast … END_OF_DOCUMENT_TOKEN_TO_BE_REPLACED

httpvh://www.youtube.com/watch?v=CofZ7xjGyI8 If there’s one thing to learn from this video, and … END_OF_DOCUMENT_TOKEN_TO_BE_REPLACED

Director Curtis Hanson and his co-writer, Brian Helgeland, have taken a massively complex novel by … END_OF_DOCUMENT_TOKEN_TO_BE_REPLACED

At the very beginning of the movie, we see Scottie vaulting across rooftops, struggling to keep up … END_OF_DOCUMENT_TOKEN_TO_BE_REPLACED

Frank Darabont has often compared The Shawshank Redemption to a Rorschach test. Written and executed … END_OF_DOCUMENT_TOKEN_TO_BE_REPLACED