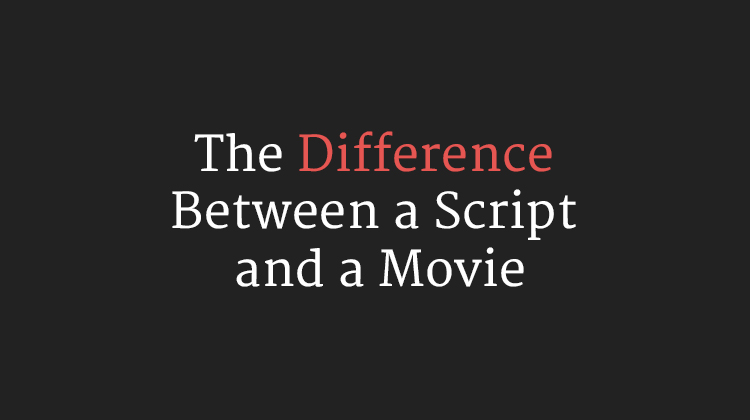 Some people say that a script is a sketch for other artists to color in, that most of the work of rendering a story ought to be left to directors, actors, art departments, or others. I disagree.

To me, a script is its own thing, a document that exists to provide proof of concept that you know what you’re doing and deserve a meeting, a job, a sale. To this end, it needs to do a few things that a movie doesn’t have to.

For instance, imagine a first page that begins like this:

JULIO (25) hits snooze on his alarm clock. His mom enters, pulls off the covers.

If this were in a TV script for a show that was already in production, this would be fine. JULIO’S been cast, the set is already built, and no one is going to be looking to disqualify the work of a writer’s room. It’s assumed that things will go pretty well.

If this were in a rewrite by someone successful, this is cool too. The rewrite has been paid for, the writer’s creds were good enough to get the job, and there’s a studio logo on the front cover. The powers that be care more about what’s done with this setup than what the blanket looks like.

A spec needs to work a little harder. Specs are primarily read by people who’s jobs are to disqualify and say no. They don’t know you from Adam, and won’t necessarily give you the benefit of the doubt. Some will accept this and read on. Others are already writing in their little notebooks:

In a movie, we’d see the reality of the room in a shot. In the development world, if this were a go project, everything would be assumed to be awesome. When we start out, we have no street cred to lean on, so we have to work a little harder.

A upscale suburban bedroom. A time capsule of 2005 teen stuff. The Pokemon alarm clock goes off.

JULIO (25) wakes up, he takes in his surroundings, then looks at where his wedding ring used to be. Oh right.

Julio, get up. The lawyer’s here!

File this one under closing image masterclass. I don’t know how many times I’ve seen the Breakfast … END_OF_DOCUMENT_TOKEN_TO_BE_REPLACED

httpvh://www.youtube.com/watch?v=CofZ7xjGyI8 If there’s one thing to learn from this video, and … END_OF_DOCUMENT_TOKEN_TO_BE_REPLACED

Director Curtis Hanson and his co-writer, Brian Helgeland, have taken a massively complex novel by … END_OF_DOCUMENT_TOKEN_TO_BE_REPLACED

At the very beginning of the movie, we see Scottie vaulting across rooftops, struggling to keep up … END_OF_DOCUMENT_TOKEN_TO_BE_REPLACED

Frank Darabont has often compared The Shawshank Redemption to a Rorschach test. Written and executed … END_OF_DOCUMENT_TOKEN_TO_BE_REPLACED