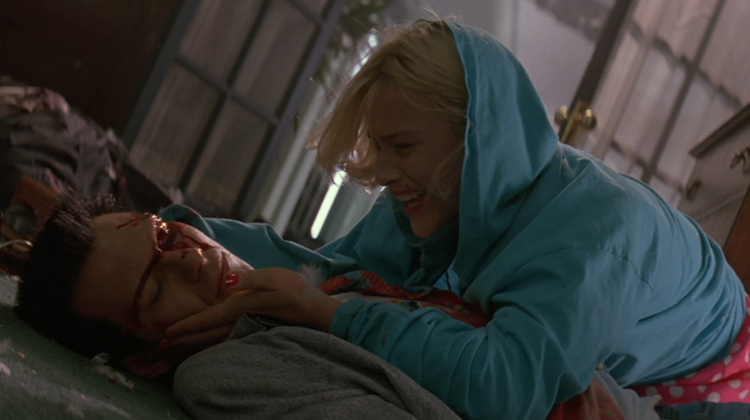 Being deeply loved by someone gives you strength, while loving someone deeply gives you courage.

After posting my True Romance Story Map/Beat Sheet, I received a question regarding the ending. The person asked how the movie had changed the significance of Tarantino’s original ending. Now, we’re jumping into extremely subjective waters here, as you could easily argue that there are multiple themes centered around love in both the original script and movie. Then again, the climax is generally the ultimate expression of the theme, and Tony Scott changed it. You see, in Tarantino’s world, Clarence dies in the big shootout. I’ve read drafts from March ’91 and August ’92, the latter being closest to the movie. The March ’91 draft ends with Alabama contemplating suicide after Clarence’s death. She glances at the “You’re So Cool” napkin with the gun in her mouth and ultimately decides to live. Here’s how the script reads:

Alabama’s driving fast down the freeway. The deejay on the radio is trying to be funny. Then the song “Little Arrows” by Leapy Lee starts playing. Alabama breaks down and starts crying. She pulls the car over to the side of the road.

The SONG continues. She wipes her eyes with the napkin she pulls out of her pocket and tosses it on the dashboard.

She picks up the .45 and puts it in her mouth. She pulls back the hammer and looks up to see her reflection in the rear view mirror. She turns it away and looks straight ahead.

Her finger tightens on the trigger.

Her eyes catch the napkin on the dashboard, partly opened and she can see the words.

(reading from the napkin)

She tosses the gun aside.

Alabama gets out of the car, opens the trunk and takes out the briefcase. She looks around for, and finally finds, the Sergeant Fury comic book Clarence bought her.

And, with the comic book in one hand and the briefcase in the other, Alabama walks away from the Mustang forever.

Lee continues looking at the merchandise. Alabama writes something on her napkin with a pencil and slides the napkin over to Clarence. It says “You’re so cool” with a tiny heart drawn on the bottom of it. Clarence takes a pencil and draws an arrow through the heart. She takes the napkin and puts it in her pocket.

Fans of the movie will remember that she writes on the napkin for him, but in the March ’91 draft (excerpt above), she scribbles some text with a tiny heart and he puts an arrow through it. This small action marks a huge distinction between the two versions: The napkin isn’t his, it’s theirs. In his original script, Tarantino comes back to the napkin at the end to emphasize that love gives you courage. It doesn’t matter that he’s dead; she’ll still love him until the day she dies. Clarence’s love for her gave him the courage to face Drexl, leave Detriot, and sell the cocaine so they can both start their lives anew. Her love for him gave her the courage to face life without him. The film is much different, simpler, and palatable: Their love overcame every obstacle placed in front of them. Isn’t it more pleasing to see the lovers ride off into the sunset? After all, you sure don’t have to think as much.

File this one under closing image masterclass. I don’t know how many times I’ve seen the Breakfast … END_OF_DOCUMENT_TOKEN_TO_BE_REPLACED

httpvh://www.youtube.com/watch?v=CofZ7xjGyI8 If there’s one thing to learn from this video, and … END_OF_DOCUMENT_TOKEN_TO_BE_REPLACED

Director Curtis Hanson and his co-writer, Brian Helgeland, have taken a massively complex novel by … END_OF_DOCUMENT_TOKEN_TO_BE_REPLACED

At the very beginning of the movie, we see Scottie vaulting across rooftops, struggling to keep up … END_OF_DOCUMENT_TOKEN_TO_BE_REPLACED

Frank Darabont has often compared The Shawshank Redemption to a Rorschach test. Written and executed … END_OF_DOCUMENT_TOKEN_TO_BE_REPLACED