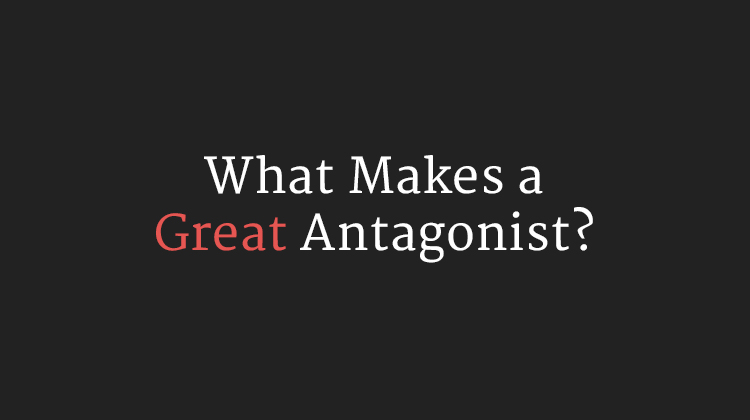 Q: What do you think makes a great antagonist? Do they always have to have a legit reason (at least to them) of why they are doing bad things? Is it as simple as having a few quirks that people hate?

A: Which is more dramatically affecting: An antagonist who has a great reason for doing his job who never actually meets the protag (rare, but some examples exist) or an antagonist who is never explained, but very present, who takes a perverse, almost sexual thrill in hurting and humiliating the hero?

It’s the latter. Antagonists are only great in the things they do, and our point of reference in a script is the protagonist. The script illustrates a world, the character is like the vehicle that we navigate the world in. Given that nothing on the page really “exists,” we need an emotional point of reference to ground ourselves in, i.e., the main character’s reactions.

This is why in war movies, the might of the Axis powers gets enshrined in one specific Nazi officer, why Vader is the face of the empire, why institutionalized slavery gets enshrined in one vile slave owner. Abstract enemies are real, but not compelling or as memorable. They need a face and a relationship to the character to really stick.

People like to say “the bad guy is the hero of his own movie” and that’s true, but that doesn’t mean he’s got to be fully psychologically realized, he could be as straight forward as the action hero in a bad, jingoistic 80’s movie. Grounding a villain’s behavior in the relatable can be a powerful tool, but it’s not necessary. Why does the Joker hate Batman? The mystery is better than any answer. All that matters it that he does.

File this one under closing image masterclass. I don’t know how many times I’ve seen the Breakfast … END_OF_DOCUMENT_TOKEN_TO_BE_REPLACED

httpvh://www.youtube.com/watch?v=CofZ7xjGyI8 If there’s one thing to learn from this video, and … END_OF_DOCUMENT_TOKEN_TO_BE_REPLACED

Director Curtis Hanson and his co-writer, Brian Helgeland, have taken a massively complex novel by … END_OF_DOCUMENT_TOKEN_TO_BE_REPLACED

At the very beginning of the movie, we see Scottie vaulting across rooftops, struggling to keep up … END_OF_DOCUMENT_TOKEN_TO_BE_REPLACED

Frank Darabont has often compared The Shawshank Redemption to a Rorschach test. Written and executed … END_OF_DOCUMENT_TOKEN_TO_BE_REPLACED