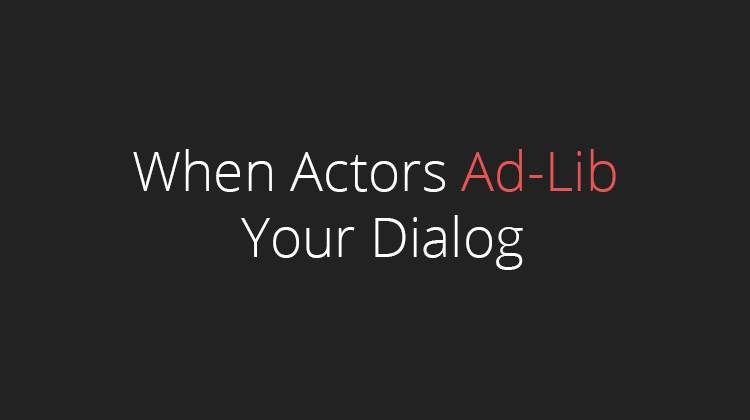 I was recently on set talking to some of the actors that had been hired to say the dialog I’d written into my screenplay. They asked me if it annoyed me when actors ad-lib and embellish the dialog I’d written. This is how I explained it to them and now I’m going to explain it to you as well:

Good dialog is concise. It’s tight. There aren’t a lot of extra words thrown in. Words are rarely repeated in a scene (I explain this in my previous post Writing Good Dialog). Rhythms differ for different characters and the word choices align with that character’s level of education and IQ.

When we speak, it’s natural for us to use the same catch phrases and words over and over. Personally, I tend to say “Oh right,” a lot when I agree with someone, or learn something new, or remember something. Most people I talk to frequently wouldn’t even notice I do this. But that’s because this is real life, not life on the big screen. In a film or t.v. show, we only see snippets of real life. Everything is condensed. So to hear a character repeat “Oh right,” or “I think,” or any other of the myriad of things people say in regular conversation, sticks out. It’s noticeable. And it not only interrupts the flow of the dialog, it also makes the scene longer. I’ve seen actors ad-lib these additional, unnecessary lines so much, that to improve the pacing of the scene in post, we’ve had to actually cut out entire exchanges of important stuff.

So to answer the question for my actor friends… I don’t mind when an actor takes the dialog I’ve written and makes it his or her own. After all, if it means a better performance, then of course.  A stellar performance trumps all. But if ad-libbing dialog means the words the actor says would be considered poorly written dialog if it were on the page, then no. Please, for the love of God, just say what’s written. And it usually takes an actor who is also a screenwriter to know the difference.

File this one under closing image masterclass. I don’t know how many times I’ve seen the Breakfast … END_OF_DOCUMENT_TOKEN_TO_BE_REPLACED

httpvh://www.youtube.com/watch?v=CofZ7xjGyI8 If there’s one thing to learn from this video, and … END_OF_DOCUMENT_TOKEN_TO_BE_REPLACED

Director Curtis Hanson and his co-writer, Brian Helgeland, have taken a massively complex novel by … END_OF_DOCUMENT_TOKEN_TO_BE_REPLACED

At the very beginning of the movie, we see Scottie vaulting across rooftops, struggling to keep up … END_OF_DOCUMENT_TOKEN_TO_BE_REPLACED

Frank Darabont has often compared The Shawshank Redemption to a Rorschach test. Written and executed … END_OF_DOCUMENT_TOKEN_TO_BE_REPLACED