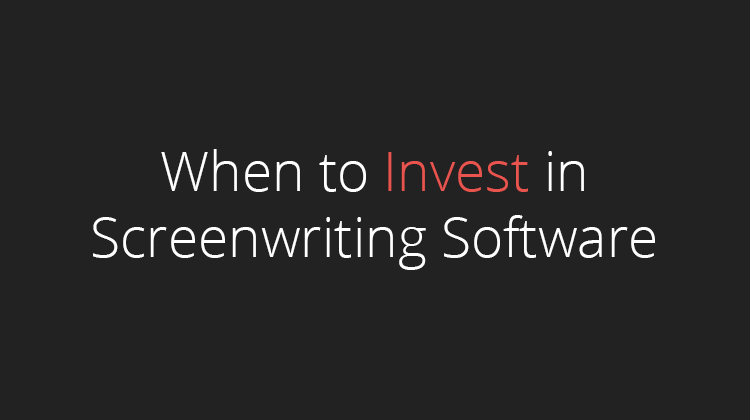 New writers often ask me how important it is to use specialized screenwriting software. It’s a good question. This stuff isn’t cheap and until you make money writing, it’s hard to justify throwing out several hundred dollars when there are other free options (like using Word or one of the myriad of free software programs).

First, let me say this…  I use Final Draft and always have. I bought one of the early versions in my third year of film school and never looked back. Because I haven’t used any others, I can’t compare the features for you but I will tell you this for certain:  Final Draft is the industry standard.

Why is that important?

First, if your screenplay is ever going to get to the point where it goes into production (isn’t that goal?), then the A.D. will need it in Final Draft so that he can break it down for scheduling purposes.  In addition to that, the director will need it in Final Draft to do her rewrite, and if you end up staying on the project through production, you will need Final Draft to track the changes in the colored production drafts. I’ve never, in all my years of being a professional screenwriter, had anyone ask me to send them the script in any format other than a PDF for Final Draft. So IF you are going to invest in screenwriting software at all, I highly suggest getting Final Draft off the bat so you aren’t inevitably buying it later.

Now, WHEN should you make the leap? That’s up to you, but think of it like this… how serious are you about screenwriting? If you were serious about becoming a chef, wouldn’t you invest in a decent set of knives? Or if you wanted to be a photographer, wouldn’t you find a way to buy a camera and a few good lenses?

Sure, Christine. But the difference is that I can’t take a photograph without a camera and I CAN write a good screenplay without screenwriting software. (I’m guessing you’re probably saying that).

And that’s true. BUT… eventually you are going to want to show someone that screenplay you wrote and if it’s not written using professional software, they will know. Believe me, they really will. And on every page, they will be reminded that you are an amateur because professionals and novices that are serious about getting their scripts through development and into production, are using software that the pro’s use.

There are, by the way, some strategies for making it more affordable. If you are a student or a teacher, Final Draft offers a discount when you buy through their website. If you’re not one of those and you plan on going to one of the various screenwriting or film expos, you can often get a discount if you buy then and there. And of course, you can split it with a buddy. Since Final Draft allows for two downloads, you can go halvsies. OR… buy an older version on sale. As long as it’s FDX and not FDR (as the earlier version, FDR cannot open FDX files, but FDX can open any document ever created in Final Draft), it’ll work just fine.

File this one under closing image masterclass. I don’t know how many times I’ve seen the Breakfast … END_OF_DOCUMENT_TOKEN_TO_BE_REPLACED

httpvh://www.youtube.com/watch?v=CofZ7xjGyI8 If there’s one thing to learn from this video, and … END_OF_DOCUMENT_TOKEN_TO_BE_REPLACED

Director Curtis Hanson and his co-writer, Brian Helgeland, have taken a massively complex novel by … END_OF_DOCUMENT_TOKEN_TO_BE_REPLACED

At the very beginning of the movie, we see Scottie vaulting across rooftops, struggling to keep up … END_OF_DOCUMENT_TOKEN_TO_BE_REPLACED

Frank Darabont has often compared The Shawshank Redemption to a Rorschach test. Written and executed … END_OF_DOCUMENT_TOKEN_TO_BE_REPLACED