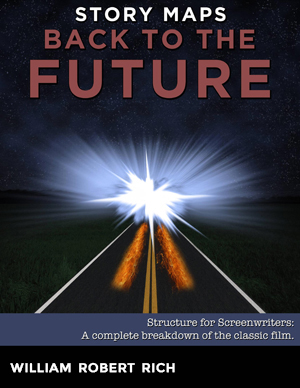 Back to the Future is the classic sci-fi, comedy, action-adventure, family film about a time-traveling teenager who accidentally changes the history of how his mother and father met. With the help of an eccentric scientist, he must get his parents to fall in love to save his existence and get back to the future. From screenwriters Robert Zemeckis and Bob Gale, the film is widely regarded as the  greatest time travel film in the history of cinema.

In Story Maps: Back to the Future, Story Analysts Daniel P. Calvisi and William Robert Rich, hosts of the Story Maps Screenwriting Podcast and authors of Story Maps: The Films of Christopher Nolan break down Back to the Future beat-by-beat in a complete outline that shows exactly how the screenplay is structured in four Acts, an Epilogue and the crucial “signpost” beats that anchor the screenplay and film in a classic structure for worldwide audiences. Complete with a full story map, story engines, full beat sheet, and over 25 setups / payoffs, this addition from the Story Maps series is a structure-based analysis of the film for screenwriters, novelists and video game writers.

File this one under closing image masterclass. I don’t know how many times I’ve seen the Breakfast … END_OF_DOCUMENT_TOKEN_TO_BE_REPLACED

httpvh://www.youtube.com/watch?v=CofZ7xjGyI8 If there’s one thing to learn from this video, and … END_OF_DOCUMENT_TOKEN_TO_BE_REPLACED

Director Curtis Hanson and his co-writer, Brian Helgeland, have taken a massively complex novel by … END_OF_DOCUMENT_TOKEN_TO_BE_REPLACED

At the very beginning of the movie, we see Scottie vaulting across rooftops, struggling to keep up … END_OF_DOCUMENT_TOKEN_TO_BE_REPLACED

Frank Darabont has often compared The Shawshank Redemption to a Rorschach test. Written and executed … END_OF_DOCUMENT_TOKEN_TO_BE_REPLACED