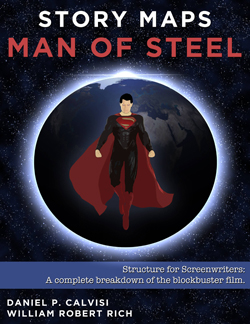 Man of Steel is an origin story written by the creative team behind another pivotal cinematic origin story, Batman Begins. David S. Goyer and Christopher Nolan bring the dark, reality-based sensibilities they honed on their Dark Knight Trilogy to the latest big-screen incarnation of perhaps the most iconic of all comic book superheroes: Siegel & Shuster’s Superman. Joined by the epic director Zack Snyder (300, Watchmen), this triumvirate of movie talents realizes a stunning popcorn blockbuster that pumps new energy into a 75 year-old character, with strong themes of destiny, blood ties, environmentalism and free will.

Zack Snyder may be the director, but Nolan’s storytelling imprint is all over Man of Steel, from the use of flashbacks to the emotionally conflicted protagonist to the epic set pieces that stretch the running time past two hours. This is the only e-book that offers a Man of Steel beat sheet / screenplay analysis.

Man of Steel is the latest Story Map for screenwriters, novelists and video game writers from the Story Maps series by Story Analysts Daniel P. Calvisi and William Robert Rich, hosts of the Story Maps Screenwriting Podcast and authors of Story Maps: The Films of Christopher Nolan. Calvisi and Rich break down Man of Steel beat-by-beat in a complete outline that shows exactly how the screenplay is structured in four Acts, an Epilogue and 15 crucial “signpost” beats that anchor the screenplay and film in a classic structure for worldwide audiences.