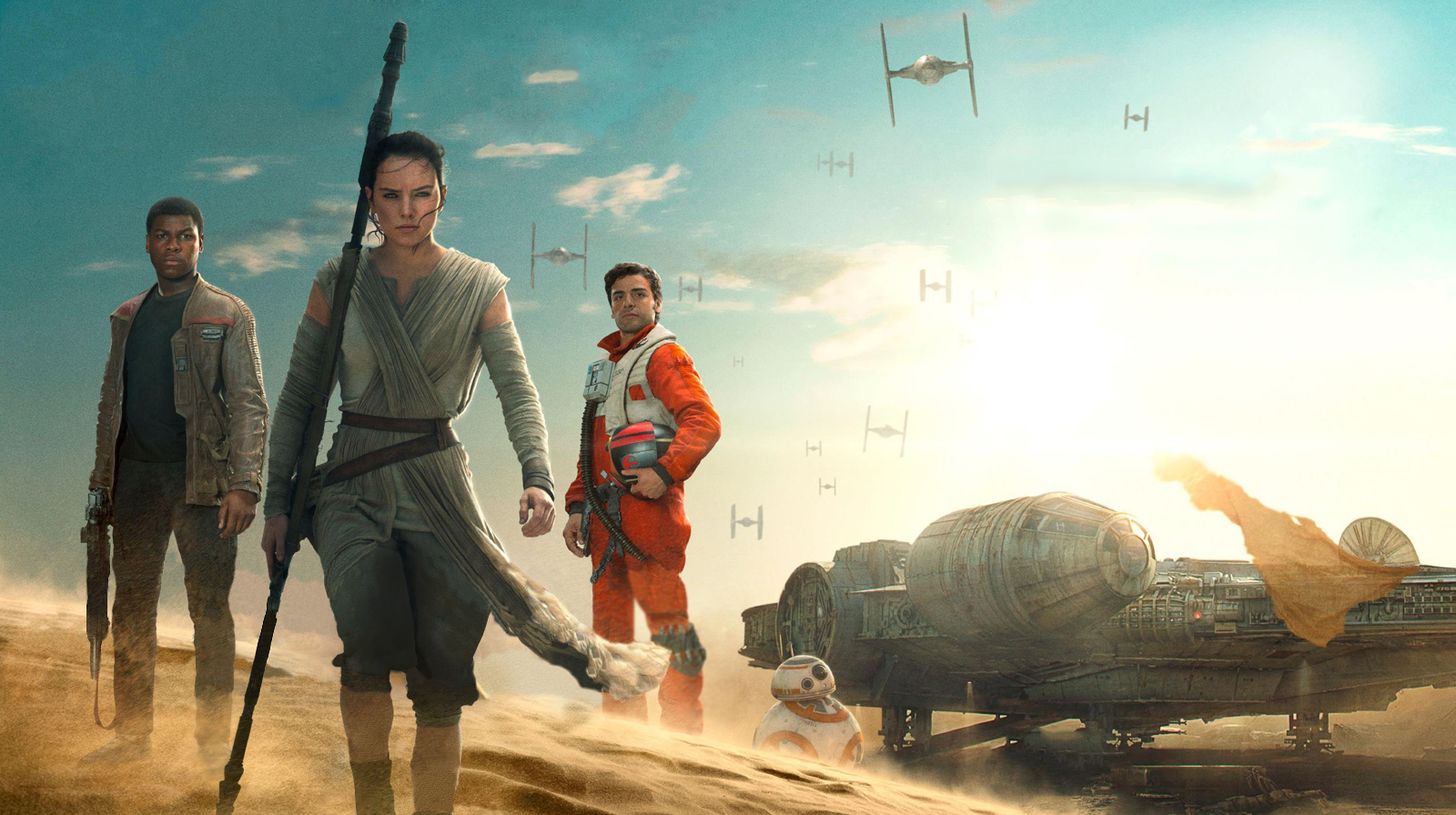 The Force Awakens did a fantastic job paying homage to the original trilogy. I loved trying to catch all the call backs as they flew by: Luke’s saber in the snow, the Jedi mind tricks, force chokes, Death Stars, Mos Eisley’s cantina and creatures, Hoth’s icy terrain, the Millennium Falcon, X-Wings, Tie Fighters, stormtroopers, Admiral Ackbar, Solo’s costumes, even Luke’s vision/nightmare of battling Vader on Dagobah — all of these were real treats for the OT diehards. It extends beyond homage, though; Plot-wise, Awakens and A New Hope are cloudy reflections of each other. I walked out of the theater having enjoyed myself, even with all the scenarios I knew had fallen short. Only in hindsight, after my Star Wars high faded, did I realize how weak the story really was. The filmmakers expertly packaged all the nostalgia fit for generations of fans into a new car with shiny paint job, but ultimately sold us a lemon…that we will all undoubtedly pay to see again and again.

Rey is a lonely scavenger on the desolate planet of Jakku, forced to comb through the remnants of a battle long past to simply eat every day. Even though she’s smart (she’s an engineer of sorts) and a pretty good pilot, she won’t leave because she’s waiting for her family to return. Contrast this with the first movie: Luke wants to join the Rebellion, not work the family farm for his uncle. He stumbles on the partial message from Leia because his uncle bought droids to help run the farm operation. The message pushes him toward his goal of becoming a great pilot and an internal goal of learning the Force. When he meets Obi-Wan and learns an abridged family history, he’s offered a chance to help the Rebellion, but declines out of respect for his uncle. But he does make a deliberate choice to help Obi-Wan, not only giving him his uncle’s property in R2-D2, but also in offering transport to Mos Eisley. Take Rey’s character in a similar scenario: Her obtaining Poe Dameron’s BB-8 droid — that harbors the location of Luke Skywalker — is pure happenstance. She hears BB-8 and then flat-out steals it from another scavenger that would have undoubtedly used it to feed his family. We’re already aware that food and water are both scarcities on Jakku. Given she’s alone all the time and stole something very valuable (hence the reason she’s attacked for it later), her action here is foolishly dangerous. But the character moment is good enough to pass: She’s desperate to have a friend, escape the loneliness. Unfortunately, it doesn’t push her toward any real goal. Back to A New Hope: Luke found Leia’s partial message and then went to Obi-Wan, his eventual mentor. Rey learns from a stranger, Finn, of BB-8’s importance and only leaves when their lives are in danger. Luke, too, leaves when his life is in danger, after his uncle and aunt are killed, but makes another deliberate choice, telling Obi-Wan that he wishes to learn the ways of the Force like his father before him. There are tons of coincidences in that first act and hardly any real choices from Rey.

The coincidences don’t stop there: Han Solo finds Rey and Finn the moment they leave Jakku. Abrams and Kasdan didn’t even try here. It’s like they were more focused on the clock, knowing the audience would jump out of their seats the moment Han and Chewie stepped foot back in the Falcon. So screw the story here – let’s just randomly drop two of the original heroes back in as quick as possible and push the story where it needs to go. Again, no choice from Rey, other than to reveal BB-8’s importance. But it’s not like there’s any real conflict in giving up that info; she knows Solo was once a prominent member of the Rebellion. So they tell Solo about the map, there’s some action (that, IMHO, should have been tied to her choosing to give up the droid/map or not), and then they travel to another set piece to visit to some weird, googly-eyed creature, Maz Kanata, whom Solo believes can help them find the Resistance. At least Rey makes two choices here: Not to go with Finn, someone she’s befriended (but she now has Han and Chewie), and to not take the lightsaber (something Luke essentially did when Obi-Wan offered him a ticket to join the Rebellion). Of course, everyone in the galaxy’s looking for them, so we get another eye-popping action sequence with the Resistance fighter pilots, led by Poe Dameron, schooling the First Order. It’s a small victory for the Resistance, but Rey is taken hostage by Kylo Ren.

[pullquote align=”right” color=”#e65652″ class=”” cite=”” link=””]Though they’ve created a technology that’s able to harness a star’s energy and destroy planets, these First Order clowns completely have their heads up their ass when it comes to guarding prisoners.[/pullquote]

None of us are really worried because we know Rey will find a way to escape. Hell, all of them do. Though they’ve created a technology that’s able to harness a star’s energy and destroy planets, these First Order clowns completely have their heads up their ass when it comes to guarding prisoners: A single stormtrooper, Finn, helps Poe Dameron escape; Han, Chewie, and Finn are surrounded by First Order Stormtroopers before the Resistance attack (certainly plausible one of them could have the map – maybe the one with the lightsaber?), but they’re left with just enough guards to overpower when the Resistance attack comes; and Rey only has one guard (listen carefully, kids – it’s James Bond) on the Starkiller base, even though Kylo Ren fully-well knows she has Force powers. Give the point to A New Hope here, at least their escape from the Death Star begins with some plausibility (the gang hides on the Falcon until they can obtain stormtrooper armor to walk freely through the Death Star).

So this takes Han, Chewie, and Finn to the Resistance, where “General” Leia uses Finn — a low-ranking, disillusioned, shell-shocked former stormtrooper — to help devise their plan of attack. This was one of the sloppiest beats in the whole damn thing. All of the sudden, the important characters are gathered around all this incredibly-detailed intel from one of the quickest reconnaissance missions in history, and proceed to haphazardly put together a plan of attack with the fate of their planet at stake. Back to A New Hope: It’s R2-D2 that’s had the Death Star blueprints the entire movie (Leia stored them on R2 when their ship was being boarded by Vader). Of course, Abrams and Kasdan had already blew their load with that jig (having BB-8 house Luke’s location), so the easy path is for the Resistance to get the info from Finn, the guy who used to work in sanitation on the base. Seriously? Even if he worked on the construction, the worker bees don’t know this shit (pun-intended). But oh well, I get to see the Resistance fighting to destroy a base that, like a bad James Bond villain’s scheme, is seconds from destroying them, all while the heroes are fighting to save their lives on and around said base. Where have we seen that before? Ah, what the fuck, it worked in the other movies.

Han Solo’s death is the biggest spoiler, possibly the most talked about part of the entire movie. But hell, I was expecting him to die. I’m sure that’s the only reason Harrison signed on. It’s fairly common knowledge that he wanted the character to die in the original trilogy. I had read some fan speculation that hypothesized Han would die by the hands of Luke. It was quite clever. Whoever wrote it correctly predicted that Han and Leia’s son would be the new Vader. Everything would build into a climatic scene where Han had to defend his evil son from Luke. Of course, Luke would win. And of course, Han is the kind of guy that would step into danger to protect his child. That would have been awesome. You could have had toys with Luke’s lightsaber through Han’s heart, Kylo Ren pissing his Vader pants in the corner. Imagine all the lunchboxes, backpacks, and Campbell’s Soup they could have sold. Unfortunately, Luke Skywalker is only in one scene, looking like a dad face-to-face with the child he abandoned twenty years ago, quickly calculating all the alimony he’ll be forced to pay now that they’ve finally found him. But back to Solo… this is another call back to A New Hope. We learn that Kylo Ren’s name is Ben, likely named after Obi-Wan, as it was Obi-Wan who sacrificed himself to save Han and Leia on the first Death Star. This time, it’s Han Solo, albiet with different circumstances. I hated the way this played out. K.B. (Kylo Ben) never had a moment where any of his actions were conflicted leading up to the confrontation. They justify such heavy drama with Supreme Leader Snoke’s intuition and K.B.’s little self-confessional monologue to a burnt relic. Han pleads with K.B., saying that Snoke is just using him to find Luke, and, once that’s complete, will destroy him. But that dynamic is never a part of K.B. and Snoke’s interactions, so Solo’s theory, while plausible, is nothing more than cheap, dime-store drama. So that dramatic shift back to reality, back to being someone’s son, felt trite, especially when they had the sun go down and then him turn evil again. For chrissakes — this is a Star Wars movie and we can find better drama in a high school production of Steel Magnolias! But I digress…

J.J. Abrams, Lawrence Kasdan, and all the folks at LucasFilm and Disney are smarter, in terms of story, than what we see in The Force Awakens. What we sometimes fail to understand is that the story is just one component of a big machine. For better or worse, this is the movie business when it comes to franchises like Star Wars. Awakens was made for a world audience, a wide, diverse group of people, some of which will need — or demand — that certain elements be spoon-fed to them. When you’re spending that much money on a movie (Disney did pay over $4 billion for LucasFilm), you want to swing for the fences on all fronts. Again, it’s a business, and, judging by the first two days at the box office, business is a boomin’. I’m just a selfish son-of-a-bitch who wishes Star Wars grew along with my sensibilities when it comes to what makes a good story. But this movie is not our last hope. After all, there is another…

File this one under closing image masterclass. I don’t know how many times I’ve seen the Breakfast … END_OF_DOCUMENT_TOKEN_TO_BE_REPLACED

httpvh://www.youtube.com/watch?v=CofZ7xjGyI8 If there’s one thing to learn from this video, and … END_OF_DOCUMENT_TOKEN_TO_BE_REPLACED

Director Curtis Hanson and his co-writer, Brian Helgeland, have taken a massively complex novel by … END_OF_DOCUMENT_TOKEN_TO_BE_REPLACED

At the very beginning of the movie, we see Scottie vaulting across rooftops, struggling to keep up … END_OF_DOCUMENT_TOKEN_TO_BE_REPLACED

Frank Darabont has often compared The Shawshank Redemption to a Rorschach test. Written and executed … END_OF_DOCUMENT_TOKEN_TO_BE_REPLACED