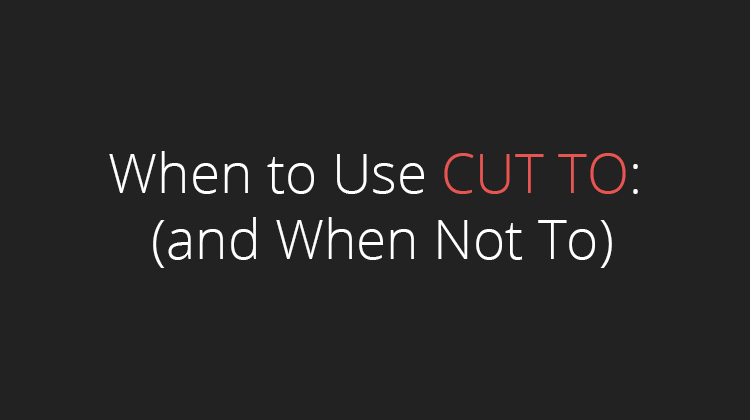 The majority of screenwriting books tell you that you should avoid using CUT TO: between scenes because it reeks of amateurish writing and quite frankly, it’s obvious that to go from one scene in a movie to the next, there will be a cut. New writers read that and typically remove every instance of CUT TO: from their scripts which can be just as bad as using it too much.

Let’s start by looking at what CUT TO: really is. It’s a transition. Transitions exist to connect the ending of one thing with the beginning of something else.

Because film and television are visual mediums, the transition between scenes when using CUT TO: (or MATCH CUT TO: or SMASH CUT TO: or DISSOLVE TO: or FADE TO: ) should be visual. Simply going from a scene of two people talking on a date to a scene of the guy walking the girl to her car after the date is over doesn’t warrant a visual transition. It’s a natural progression and we can assume that time has been ellipsed. That’s the situation with MOST scenes.

There are, however, times when a visual transition helps us to better understand the content. The simplest example is the fade that is often used when a character begins to remember something in the past. The fade is a common cinematic element that signifies the transition from what’s happening in the present to a scene that happened previously. That’s an easy one. CUT TO: is much more subtle.

We use CUT TO: when we want to make a point of ending the scene where we did. For example, if you end a scene on a character telling his wife that he’s sorry for cheating on her and it will never happen again, and the beginning of the next scene is him in bed with another woman, adding CUT TO: makes sense. It brings attention to some sort of disparity between what was conveyed in the previous scene with what’s happening in the current scene. Sometimes it’s used for comedic affect, sometimes irony, or in the aforementioned example, to punctuate the character’s lie to his wife. It tells the reader that there is a visual disparity about to happen so pay attention. On the screen, the disparity will be obvious to viewers, but on the written page, it can be more easily overlooked by the reader.

File this one under closing image masterclass. I don’t know how many times I’ve seen the Breakfast … END_OF_DOCUMENT_TOKEN_TO_BE_REPLACED

httpvh://www.youtube.com/watch?v=CofZ7xjGyI8 If there’s one thing to learn from this video, and … END_OF_DOCUMENT_TOKEN_TO_BE_REPLACED

Director Curtis Hanson and his co-writer, Brian Helgeland, have taken a massively complex novel by … END_OF_DOCUMENT_TOKEN_TO_BE_REPLACED

At the very beginning of the movie, we see Scottie vaulting across rooftops, struggling to keep up … END_OF_DOCUMENT_TOKEN_TO_BE_REPLACED

Frank Darabont has often compared The Shawshank Redemption to a Rorschach test. Written and executed … END_OF_DOCUMENT_TOKEN_TO_BE_REPLACED